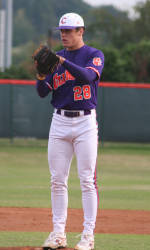 Clemson vs. Boston College Clemson (16-6, 5-4 ACC), ranked as high as #20 in the nation, will travel to Chestnut Hill, MA to take on Boston College (14-7, 4-3 ACC) in a three-game series at Eddie Pellagrini Diamond this weekend. Game times are 2:30 PM (Friday), 1:30 PM (Saturday), and 11:30 AM (Sunday). The series will feature the top-two teams in the ACC Atlantic Division standings, as the Eagles are only percentage points ahead of the Tigers in first place. All three games will be broadcast live on the radio by Clemson Tiger Sports Network. Live stats will also be available at ClemsonTigers.com for all three games.

The Series Clemson and Boston College have met nine times on the baseball diamond, with the Tigers holding a 5-4 all-time lead in the series dating back to the 2006 season, the Eagles’ first season as a member of the ACC.

In 2008 at Doug Kingsmore Stadium, the Eagles won the first two games of the series by a combined score of 13-10 before Clemson topped Boston College 16-2 in the series-finale. The first eight games in the series were all decided by three runs or less.

The Starting Pitchers In game-one, Boston College will start senior righthander J.B. MacDonald (2-2, 2.41 ERA) on the mound. The Danvers, MA native has made five starts for a total of 33.2 innings pitched. He has allowed 26 hits (.215 opponents’ batting average) and 12 walks with 32 strikeouts.

The Tigers will counter with freshman lefty Chris Dwyer (2-0, 2.63 ERA) on Friday. The Swampscott, MA native has made five starts for a total of 27.1 innings pitched. He has given up 16 hits (.170 opponents’ batting average) and 11 walks with 26 strikeouts.

In game-two, the Eagles will start sophomore righty John Leonard (1-0, 6.16 ERA) on the mound. The Hanover, MA native has made three starts and one relief appearance for a total of 19.0 innings pitched. He has allowed 29 hits (.363 opponents’ batting average) and four walks with 12 strikeouts.

Clemson will counter with sophomore lefty Casey Harman (2-1, 2.31 ERA) on Saturday. The South Burlington, VT native has made seven relief appearances and two starts for a total of 23.1 innings pitched. He has given up 23 hits (.253 opponents’ batting average) and four walks with 23 strikeouts.

In game-three, Boston College will start freshman righty Mike Dennhardt (2-0, 8.10 ERA) on the mound. The Oradell, NJ native has made four starts and one relief appearance for a total of 16.2 innings pitched. He has allowed 19 hits (.275 opponents’ batting average) and 11 walks with 12 strikeouts.

Clemson will counter with sophomore righthander Graham Stoneburner (2-2, 3.57 ERA) on Sunday. The Richmond, VA native has made five relief appearances and three starts for a total of 22.2 innings pitched. He has yielded 22 hits (.247 opponents’ batting average) and six walks with 29 strikeouts.

The Eagles Boston College, led by third-year Head Coach Mik Aoki, enters the series against #20 Clemson with a 14-7 overall record and 4-3 ACC mark after splitting a pair of midweek games on the road on Tuesday and Wednesday. Boston College beat Hartford 8-4 on Tuesday but fell to Holy Cross 8-2 on Wednesday. The Eagles also won two of three games at Maryland last weekend. Friday’s game will mark the first home game of the season for Boston College, who is 11-6 on opponents’ home fields and 3-1 in neutral-site games.

Boston College is averaging 7.6 runs per game and hitting .320 with a .470 slugging percentage and .400 on-base percentage. The team has also totaled 60 doubles, four triples, 15 homers, and 14 stolen bases in 28 attempts.

Junior catcher Tony Sanchez is hitting a team-best .398 with eight doubles, five homers, 22 RBIs, and a .495 on-base percentage. He has only allowed three stolen bases in six attempts as well. Robbie Anston is batting .395 with 10 doubles, while Mickey Wiswall is hitting .378 with nine doubles, three home runs, and 23 RBIs. Mike Belfiore has added a team-high 25 RBIs as well.

The pitching staff has a 4.97 ERA and .274 opponents’ batting average along with 164 strikeouts against 80 walks in 186.1 innings pitched. Belfiore, a junior lefthander, has five of the team’s six saves along with 18 strikeouts in 13.1 innings pitched over 10 relief appearances. Junior righty Chris Kowalski has also appeared in 15 of the team’s 21 games in relief. The Eagles are fielding at a .971 clip as well.

The Tigers Clemson, ranked as high as #20 in the nation, enters the series at Boston College with a 16-6 overall record and 5-4 ACC mark after sweeping a doubleheader from Elon at Doug Kingsmore Stadium on Tuesday by a combined score of 13-10. The Tigers also won one of three games at #24 Florida State last weekend. Clemson is 2-4 on opponents’ home fields this season.

The trip to Boston College will be a homecoming for freshman lefthander Chris Dwyer, who hails from Swampscott, MA. His hometown is approximately 20 miles from the Boston College campus. Dwyer is slated to start Friday’s game on the mound.

Freeman Finding His Swing Junior second-baseman Mike Freeman (Orlando, FL) has been Clemson’s hottest hitter of late. In the last 13 games, he is 26-for-53 (.491) with five doubles, two triples, one homer, 10 RBIs, a .717 slugging percentage, .585 on-base percentage, four stolen bases, and a .985 fielding percentage. He has hit safely in 12 of the last 13 games and has eight multi-hit games during that stretch as well. Thanks to his surge, he is hitting .357 with a .486 on-base percentage on the season.

Tigers Sweep Elon in Doubleheader Clemson, ranked #20 in the nation, defeated Elon twice by a combined score of 13-10 in a doubleheader at Doug Kingsmore Stadium on March 24. Clemson outhit Elon .388 to .333, led by five hits by Mike Freeman and Brad Miller. The Tiger pitching staff had a 4.00 ERA and totaled 15 strikeouts against only three walks.

In the first game of a doubleheader on March 24, Miller and Freeman totaled three hits apiece to lead Clemson to a 5-3 win over Elon. The Tigers totaled 13 hits, while the Phoenix tallied 14 hits. John Nester’s two-run, opposite-field homer in the eighth inning gave the Tigers a three-run lead. Clemson was aided by three sacrifice bunts as well. Clinton McKinney pitched 3.0 scoreless innings in relief of two-hit ball with three strikeouts to earn the win. Matt Vaughn recorded the final three outs to record the save.

In the second game of a doubleheader on March 24, Clemson outlasted Elon 8-7. Chris Epps’ three-run homer in the second inning tied the score, then Clemson scored two runs in the fifth inning to take a 7-6 lead. The Tigers surrendered a run in the ninth inning, but they hung on for the one-run win with the potential tying run on second base when the game ended. Four Tigers had multi-hit games, while Epps totaled a team-high four RBIs for Clemson, who had 13 hits in the game. Pat Irvine and Mike Melillo hit two home runs apiece for Elon, who totaled 11 hits. Tomas Cruz recorded the save.