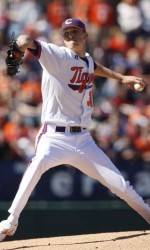 Clemson vs. Virginia Clemson (17-4, 6-0 ACC), ranked as high as #5 in the nation, will play at #1 Virginia (18-3, 5-1 ACC) in a three-game series at UVa Baseball Stadium this weekend. Game times are 6:00 PM (Friday), 4:00 PM (Saturday), and 1:00 PM (Sunday). All three games will be broadcast live on the radio by Clemson Tiger Sports Network. Live stats will also be available at ClemsonTigers.com for all three games.

The Series Clemson and Virginia have met 140 times on the diamond, with the Tigers holding a 101-39 lead in the series dating back to the 1955 season. Last year in the ACC Tournament at Durham, NC, Virginia defeated Clemson 6-5. The two teams did not meet during the 2008 or 2009 regular season.

Three years ago at Clemson, the Cavaliers beat the Tigers twice in three games. In 2006, the last regular-season series between the two at Virginia, the Cavaliers swept Clemson by a combined score of 19-7. Virginia has won six games in a row over the Tigers at UVa Baseball Stadium and nine of the last 10 games overall.

The Tigers hold a 39-22 lead all-time in games played at Virginia. Clemson also holds a 91-32 advantage in games played in the ACC regular season. Head Coach Jack Leggett is 30-19 against Virginia as Clemson’s head coach, including a 12-9 record at UVa Baseball Stadium.

The Starting Pitchers In game-one, Virginia will start sophomore lefthander Danny Hultzen (4-1, 1.06 ERA) on the mound. The Bethesda, MD native has made five starts for a total of 34.0 innings pitched. He has allowed 16 hits (.138 opponents’ batting average) and four walks with 43 strikeouts.

The Tigers will counter with junior lefty Casey Harman (4-0, 1.86 ERA) on Friday. The South Burlington, VT native has made five starts for a total of 29.0 innings pitched. He has allowed 19 hits (.188 opponents’ batting average) and 11 walks with 21 strikeouts.

In game-two, the Cavaliers will send out junior righty Robert Morey (3-1, 3.07 ERA) on the mound. The Virginia Beach, VA native has made five starts for a total of 29.1 innings pitched. He has yielded 27 hits (.252 opponents’ batting average) and 11 walks with 22 strikeouts.

Clemson will counter with sophomore lefty Will Lamb (2-0, 2.08 ERA) on Saturday. The Seaford, VA native has made four starts and one relief appearance for a total of 21.2 innings pitched. He has allowed 18 hits (.234 opponents’ batting average) and 10 walks with eight strikeouts.

In game-three, Virginia will start junior righthander Cody Winiarski (2-0, 5.70 ERA) on the mound. The Madison, WI native has made five starts for a total of 23.2 innings pitched this season. He has given up 27 hits (.297 opponents’ batting average) and 10 walks with 17 strikeouts.

The Tigers will counter with sophomore righty Scott Weismann (3-0, 2.96 ERA) on Sunday. The Boxborough, MA native has made five starts for a total of 27.1 innings pitched. He has given up 26 hits (.239 opponents’ batting average) and seven walks with 27 strikeouts this year.

The Cavaliers Virginia, led by seventh-year Head Coach Brian O’Connor and ranked as high as #1 in the nation, enters the series against #5 Clemson with an 18-3 overall record and 5-1 ACC mark after topping Marshall at home by a score of 6-3 on Tuesday. The Cavaliers are also coming off a three-game sweep over Boston College at UVa Baseball Stadium last weekend. Virginia, who has won six games in a row and 12 of the last 13 games, is 12-1 at home this season.

Keith Werman is hitting .475 with seven sacrifice bunts, while John Barr is batting .436 with a 558 on-base percentage. Phil Gosselin is hitting .412 with 10 doubles, one triple, three homers, 17 RBIs, and six steals, while Tyler Cannon is batting .400 with 10 doubles, three triples, and 20 RBIs. Dan Grovatt has added a .395 batting average along with four home runs and 24 RBIs, while Steven Proscia has a team-high 20 RBIs.

The pitching staff has a 3.42 ERA and .229 opponents’ batting average along with 177 strikeouts against 67 walks in 187.0 innings pitched. In 12.0 innings pitched over 10 relief appearances, junior righthander Kevin Arico has seven saves and has allowed just eight hits and two walks with 18 strikeouts. The Cavaliers are fielding at a .977 clip as well.

The Tigers Clemson, ranked as high as #5 in the nation, enters the series at #1 Virginia with a 17-4 overall record and 6-0 ACC mark after falling twice in two games at home to Elon on Tuesday and Wednesday. The Tigers, who are 1-1 on opponents’ home fields, also swept Virginia Tech in a three-game series at home last weekend.

The pitching staff has a 3.69 ERA and .249 opponents’ batting average. The staff has allowed 78 walks against 147 strikeouts. Righthanders Alex Frederick both have two saves apiece. The Tigers are fielding at a .950 clip as well.

Three Tigers hail from the state of Virginia, Will Lamb (Seaford), and J.T. Wauford (Midlothian). No current Tiger has ever been on a travel roster for a game at Virginia.

Boyd’s Double-Digit Hitting Streaks Fifth-year senior outfielder Wilson Boyd (Hickory, NC) is Clemson’s only current player who was a member of a Tiger team that played in the College World Series. In 2006, he red-shirted and did not play any games when the Tigers made it to Omaha. Although not flashy, his consistency has been a staple for Clemson’s lineup for years.

Elon Beats Tigers Twice in Midweek Games Elon won both games of a two-game midweek series against Clemson by a combined score of 19-13 at Will Lamb, Kyle Parker all had three hits apiece to lead Clemson in the series. The Tigers also had a 5.68 ERA.

In game-one on March 23, Elon scored 11 runs in the last four innings to rally for a 15-10 win over Clemson. The loss snapped Clemson’s 18-game home winning streak dating back to 2009. The Phoenix held a 4-1 lead before the Tigers scored seven combined runs in the third through fifth innings. But thanks in part to four costly Tiger errors, Elon scored 11 runs, including five in the sixth inning to take the lead for good, in the final four innings. Clemson committed five errors in the game, leading to six unearned runs. Elon outhit Clemson 16-12. Wilson Boyd, Parker, and Lamb all hit solo homers, while Lamb was 3-for-4 with a double, three RBIs, and three runs. Four different Elon players had three hits apiece.

In game-two on March 24, Seth Canipe’s two-out single plated Ryan Adams for the game-winning run in the 10th inning to lift Elon to a 4-3 win over Clemson. Adams, who pitched a perfect 10th inning to record the save, hit a two-out double in the 10th and scored on Canipe’s single through the left side. Elon outhit Clemson 10-6, while both teams stranded 11 runners on base. Clemson, who walked eight times, left seven of its 11 runners in scoring position and failed to put its leadoff batter on base in all 10 innings.