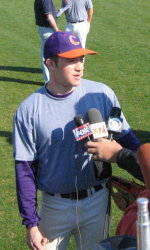 The Clemson baseball team held its first practice Friday afternoon at Doug Kingsmore Stadium in preparation for the 2005 season. Thirty-five Tigers comprise this year’s squad, which will play its first game on February 18 against West Virginia at Myrtle Beach, SC. Clemson is ranked #21 in the Preseason Collegiate Baseball poll and #23 in the Preseason Sports Weekly/ESPN Coaches’ poll. The Tigers are coming off their 18th consecutive NCAA Tournament appearance in 2004, which is tied for the fourth-longest streak in NCAA history.

Late last year, the Clemson baseball program set a team record with a 2.94 GPA during the fall, 2004 semester. The Tigers also had a record 21 players earn a 3.0 GPA or higher during the semester.

Jack Leggett on the upcoming 2005 season: “I’m excited about the year, as always. Every year brings something new to the table. We have a good group of young kids, a good group of veterans, and a very tough schedule again, and a great challenge for us. We’re really excited about it. We have to be on guard all of the time. No matter when you play, it’s a big game. I like the schedule we play; it’s a very challenging schedule, and really what I prefer to do.”

Jack Leggett on the Tiger newcomers: “We have some good, young players. We lost some guys off last year’s team that had experience, but at the same time I feel like there’s some experience on this team along with some youth. There are some very good coachability traits on this team. I really like how our fall practices went and how our workouts have gone so far. I don’t look at them as young; I look at them as eager.”

Jack Leggett on role changes in 2005: “We have a lot of middle infielders that can play different positions, so there will be some new faces around the infield. We will have a lot of depth if we can find the right combination of guys. We have some good players in the outfield, some new players and some veteran players. We have some new catchers behind the plate as well. We have a mixture of youth, experience, and versatility in all areas. These guys can play a lot of different positions. In our pitching staff, we have some good arms; we just have to piece them all together. I think we have more team speed. We don’t have as much power as we’ve had in the past, so we’re going to have to do a lot of little things really well.”

Kris Harvey on the 2005 season: “I’m going to have to step up this year; we have a lot of young guys. We lost a lot of leaders off of the team from last year. I think I’m going to get a lot of time on the mound. Our pitching staff is pretty young; we don’t have that many guys coming back. I’ll definitely have to step up and pitch, and probably hit from the DH role.”

Kris Harvey on what this team has to do to be successful: “Our freshmen have to step up and play. We need good pitching. We have to hold teams to two or three runs a game in order to win. We don’t have the firepower that we had last year, so we have to get four or five runs to make it stick. This is much more of a small-ball team than we’ve had, at least that last three years that I’ve been here. It’s going to be different; we’ll see how it plays out.”

Travis Storrer on the upcoming season: “Personally, I’ll do whatever I can do to help the team win. We don’t have a superstar like we did last year with Brad (McCann) or Lou (Santangelo); it’s going to be nine guys that have to work together, and I think that once we all start meshing together and do our part, there won’t be anyone here that’s thinking about themselves. We have a lot of new guys, and those of us that have been here have to lead them.”