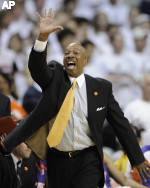 Tickets for the Charleston Classic On Sale Monday

The Clemson men’s basketball will begin its season November 14-16 at the inaugural Charleston Classic, held in Charleston, SC. Tickets for the eight-team tournament will go on sale Monday, September 15. Fans can obtain ticket information by visiting www.charlestonclassic.com or by calling the Carolina First Center box office at (843) 953-2632. Fans can purchase travel packages to the tournament by logging on to www.AnthonyTravel.com or by calling 1-800-736-6377.

The Tigers will tip-off the 2008-09 season on Friday, November 14 at 9:30 PM against Hofstra in a first-round matchup. The winner of the game will take on the winner of TCU vs. Western Michigan on Saturday, November 15. The 2008 Charleston Classic field includes College of Charleston, Clemson, East Tennessee State, Hofstra, SIU-Edwardsville, Temple, TCU, and Western Michigan.

Clemson is one of two teams in the field that played in the 2008 NCAA Tournament. Temple is the other. Each team will compete in one game per day, advancing through a bracket format. The two teams that remain undefeated throughout the tournament will face off in a championship game showdown on Sunday, November 16 at 4:00 PM.