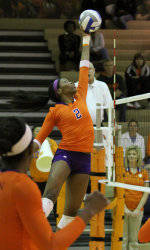 GREENSBORO, NC – A trio of Clemson juniors – Sandra Adeleye, Alexa Rand, and Serenat Yaz– have been named to the 2011 All-ACC Volleyball team, comprised of 18 players in the league. Awards are determined by voting of the 12 head coaches in the league. Clemson, Duke, Florida State, Miami, and North Carolina each put three players on the team to lead all schools.

Adeleye earns her third All-ACC selection in as many seasons, while Rand and Yaz were each named for the first time in their careers. The three have been key to Clemson’s success this season, which includes a 19-11 mark overall and an 11-8 mark in the ACC. The Tigers can wrap up fifth place in the league with a win Wednesday against Georgia Tech in Atlanta.

Adeleye leads Clemson and ranks seventh in the ACC at 3.35 kills per set and 3.90 points per set. She notched a career high 27 kills against No. 22 Miami last week, and her .350 hitting percentage is sixth in the ACC. Adeleye is the first player since Kelsey Murphyin 2009 to be named to three straight All-ACC teams.

Rand, who was named to the 2009 All-ACC Freshman team two years ago, earns her first All-ACC honor. She ranks second in the ACC and tenth nationally at 1.46 blocks per set. She is averaging 2.04 kills per set and is hitting .337 for the season, eighth-best in the ACC. She has accounted for 2.92 points per set this season.

Yaz, who had a breakout sophomore season last year, has again found her stride, leading Clemson at 3.50 kills per set in ACC play. Yaz was named the ACC Co-Player of the Week on Monday for her play against No. 21 Florida State and No. 22 Miami, when she averaged 4.78 kills per set and 2.78 digs per set.

Clemson closes the season against Georgia Tech on Wednesday and will watch on Sunday at 6:00 pm for the NCAA Selection Show on ESPNU.