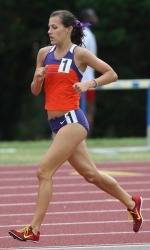 CLEMSON, SC – Three members of the No. 6 ranked women’s track & field program were named to the Capital One Academic All-District Second Team, announced Thursday by the College Sports Information Directors of America (CoSIDA). Alyssa Kulik, Patricia Mamona and Liane Weber were all honored. It was the second straight year that both Mamona and Weber were named to one of CoSIDA’s Academic All-District teams.

Weber was an ESPN the Magazine First-Team Academic All-American in 2010. This season, she competed only during outdoor season after exhausting her indoor eligibility. She helped the Tiger women’s team to a second straight ACC outdoor championship. Weber won the conference’s heptathlon for the second straight season, and will compete in the event next week at the NCAA Outdoor Championships. She was also All-ACC in the javelin throw. Weber earned her undergraduate degree in health science from Clemson University in December.

Mamona was named to ESPN the Magazine’s Academic All-America Second Team in 2010. Like Weber, she also exhausted her indoor eligibility so has only competed with the women’s team during the outdoor season. She was the ACC’s runner-up in both the triple jump and the heptathlon. This season, she set a personal collegiate best in the triple jump (46’2.75″) and looks to defend her outdoor national championship in the event next week in Des Moines, IA. Mamona earned her undergraduate degree in health science from Clemson University last month.

Kulik earned her first Capital One Academic All-District honor with Thursday’s selection. She was an all-region performer and an All-ACC Academic Team member for cross country in the fall. On the track, she earned a bid to her first NCAA national championship meet in the 3000 steeplechase. Kulik broke her own school record in the event last weekend at the NCAA East Preliminary Round with a time of 9:58.49, becoming the first Tiger female to earn entry to the NCAA Championships in the steeple. She is majoring in modern languages, with a minor in psychology.