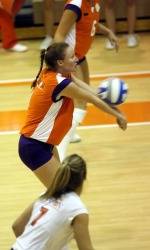 The honor is the second for Mansfield and Steiner, who were also named All-ACC in 2007. Eckman was also a repeat selection having earned the accolade in 2005, the inaugural year of the all-academic team. The three seniors helped the Tigers win their first ACC Championship since 1996 with a 20-1 conference record last year.

Mansfield finished her Clemson career as one of just four players in school history to accumulate over 500 kills, 1000 digs and 200 blocks, while Steiner ranked in the top 10 in the Tiger annuals for career hitting percentage (.316), block assists (350) and blocks per game (1.12). Eckman, a defensive specialist from St. Charles, IL, led the team with 36 service aces and tallied 254 digs in 2007.

The 32-member team includes at least one athlete from each of the league’s 12 member institutions, as well as 17 repeat honorees from a year ago. To be eligible for consideration, a student-athlete must have earned a 3.00 grade point average for the previous semester and maintained a 3.00 cumulative average during her academic career.

Joining Mansfield and Steiner on this year’s team are 2007 All-ACC selections Ali Hausfeld and Rachael Moss of Duke, Ulrike Stegemann of Georgia Tech, Sarah Kirkwood of Virginia and Natalie Mullikin of Wake Forest. Hausfeld, the 2006 ACC Player of the Year, and Steiner, Moss, Stegemann and Kirkwood were also named to the All-East Region team by the AVCA.

Leading all schools with five selections to this year’s All-Academic team is Duke. In addition to Hausfeld and Moss, Blue Devil senior Jenny Shull and juniors Sue Carls and Jourdan Norman landed a spot on the 2007 squad. All five were also a part of last year’s team.

Maryland’s Beth Gillming, Virginia’s Kirkwood, Wake Forest’s Mullikin and Georgia Tech’s Stegemann join the team as three-time honorees, each having been a part of the inaugural All-ACC Academic Volleyball team for 2005.