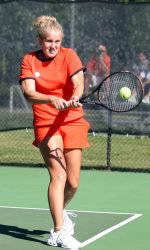 CHAPEL HILL, NC – Members of the Clemson women’s tennis team competed on the second day of competition at the 2006 Wilson/ITA Southeast Regional in Chapel Hill, NC on Friday. Three Clemson singles players posted victories to advance to the second round of the singles bracket of the tournament, which is being held at the Cone-Kenfield Tennis Center on the campus of the University of North Carolina. Two Tiger doubles teams reached the Round of 16 in the doubles draw with wins on Friday.

In Friday morning singles action, Carol Salge, one of the tournament’s 5-8 seeds, won a 6-2, 6-1 decision over Emily Wade of UNC-Greensboro. The junior from San Roque, Brazil will face Vanderbilt’s Amanda Taylor on Saturday morning at 11:00 a.m.

Freshman Ani Majacika (9-16 seed), a native of Makarska, Croatia, posted a tiebreak win over Caitlin Whoriskey of Tennessee (6-3, 7-6(4)) on Friday. Majacika will meet Sierra Poske of Wake Forest in Saturday’s second round at 10:30 a.m.

After receiving a bye in the first round, Majacika and Salge, who were ranked a 5-8 seed in the doubles draw, posted an 8-0 victory over Pooja Kommireddi and Stephanie Parkison of Middle Tennessee State on Friday. Majacika and Salge will face Amanda Granson and Zawacki of Duke in the Round of 16 at 9:00 a.m. Saturday.

In other doubles play, Clemson’s Brito and Luc upset Vanderbilt’s 9-16 seeded team of Catherine Newman and Amanda Taylor. The pair took an 8-6 decision in the match and will now face the draw’s fourth-seeded team of Kim Coventry and Joelle Schwenk of Kentucky on Saturday at 9:00 a.m.

Also receiving a first round bye were Babic and sophomore Federica van Adrichem of Amersfoort, The Netherlands. The pair, a 9-16 seeded team going into the tournament, lost an 8-3 decision to Hala Sufi and Claudia Szabo of Middle Tennessee State on Friday.