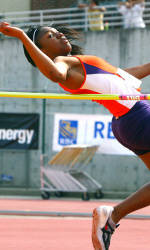 Atlanta, GA – Anastasia Wilson and April Sinkler both posted regional-qualifying performances in the high jump to lead the Clemson women’s track & field team at the Georgia Tech Invitational over the weekend. Wilson and Sinkler tied for first in the event, clearing 5’8.75″.

The height moves both student-athletes into a tie for second place in Clemson’s record books in the high jump. Wilson’s previous outdoor best had been a jump of 5’7.75″ at the ACC Championships. Sinkler’s mark this weekend was her first in the outdoor high jump.

Caroline Kennedy also will advance to the East Region Championships, her second straight year doing so in the pole vault. The Orlando, FL native cleared a personal best 12’7.5″ and finished in third place Saturday. Her mark ranks fourth in Clemson history for the outdoor pole vault.

Nakeisha Wineglass competed in the triple jump in hopes of posting a regional mark. She came up just short, but was eighth place with a jump of 40’0.75″. Bethanie Wachna was seventh in the javelin after a throw of 140’1″.

The Lady Tigers will return to action in two weeks for the NCAA East Region Championships, which will be held at Florida State University in Tallahassee, FL.