The three selections this season mark the most Tigers to earn All-Conference honors since 2018. These three also become the first players under Clemson Head Coach Jackie Simpson Kirr to garner All-ACC or ACC All-Freshman accolades.

Slavik (Saint Charles, Ill.) earns her first All-ACC honors with her Second Team selection after tallying 1,065 assists on the season to average 10.34 per set, which leads the conference. She surpassed 3,500 career assists earlier this season against Boston College and moved into fifth-place all-time on Clemson career list with 3,826 career assists. The senior has finished with 40 or more assists in every match with four or more sets, including tying her career-best 52 assists twice this year and has 11 double-doubles so far this season. Slavik also has contributed 232 digs, 52 kills, 33 blocks and 26 aces in 2022.

Hannah (Lansing, Ill.) earns her second All-ACC honors with her Second Team selection after finishing with 382 kills to average 3.44 per set, which were good for seventh and ninth, respectively, in the conference overall. She opened the season with 26 kills and has tallied 19 matches in 2022 with double-digit kills. Hannah surpassed the 1,000 career points march earlier this season against Miami in Jervey Gym. The junior has 422 points this season to complement her 81 digs and 52 blocks, while also serving nine aces, four of which came against Gardner-Webb.

McGrath (Deerfield, Ill.) becomes the first freshman to be an ACC All-Freshman selection for the Tigers since Hannah was named to the team during the 2020-21 season. McGrath has started in 22 matches as a true freshman. She has been both an offensive and defensive threat for Clemson with 206 kills and 231 digs. She set a career-high 17 kills against Florida State and a season-high 16 digs at Miami. The freshman has tallied double-digit kills and double-digit digs in 10 different matches, while posting a double-double in five matches. She has 240.5 points on the year with 26 aces, 24 assists and 12 total blocks.

The Tigers return to the court on Saturday, Dec. 3 at 4 p.m. in Lynchburg, Va., for the First Round of the NIVC Tournament. 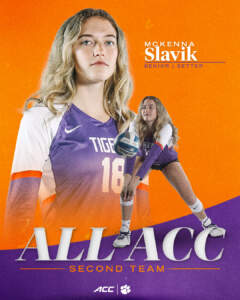 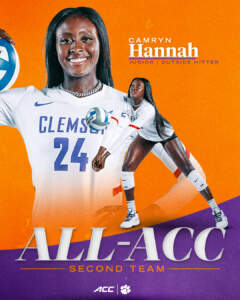 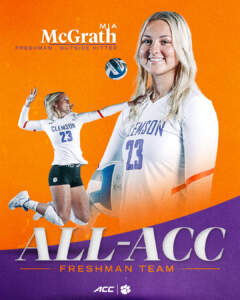