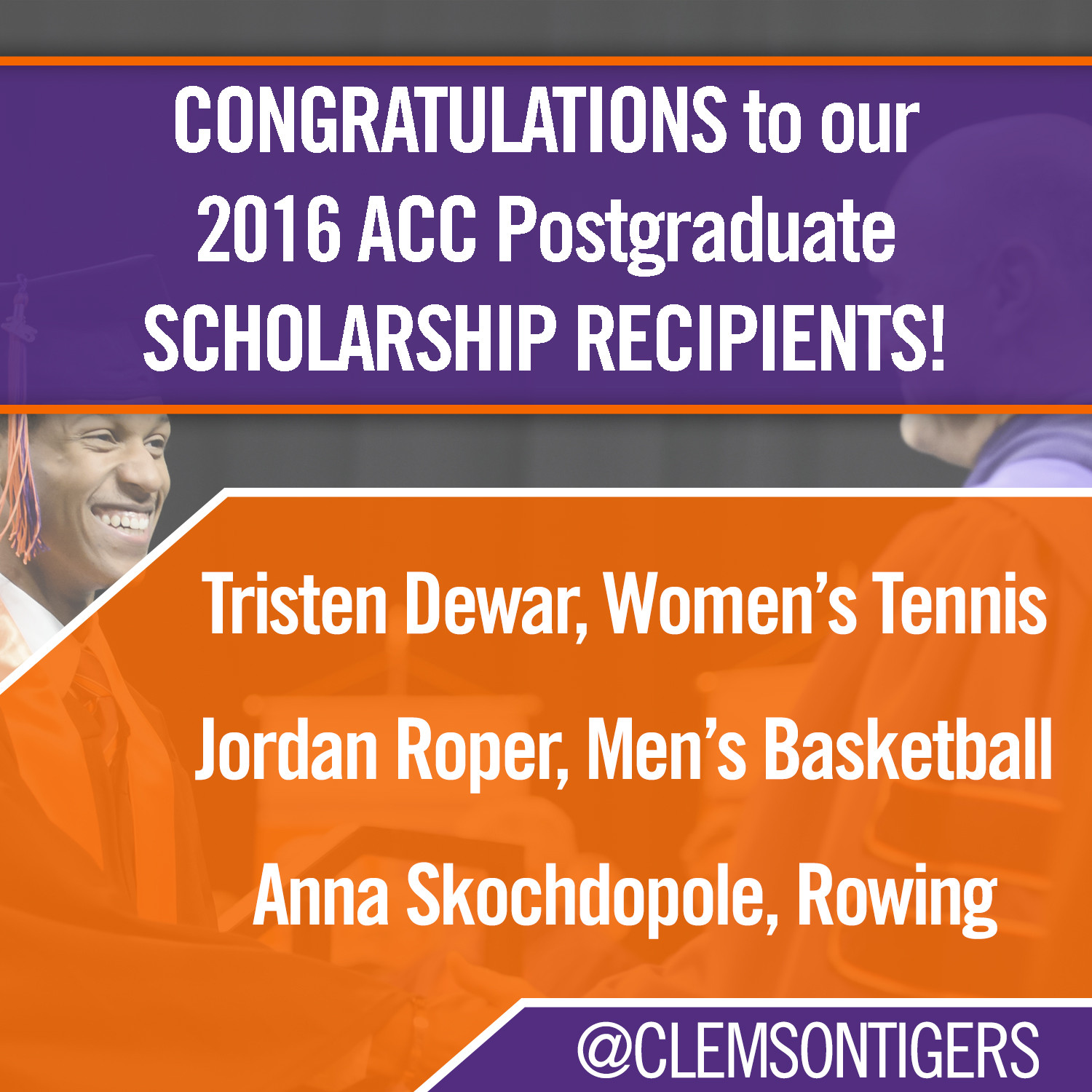 Dewar, a senior from Bradenton, Fla. has 70 career singles wins and 58 career doubles wins entering the Spring 2016 season. In the fall of 2015, she and her partner won the Flight 2 Doubles title at the USTA Collegiate Clay Court Invitational in Orlando, Fla. Dewar has several academic honors to her name, including ITA Scholar Athlete and All-ACC Academic Team awards in 2015, as well as multiple recognitions on the ACC Academic Honor Roll. She is an involved member of the Student-Athlete Advisory Committee, and earned her undergraduate degree in Communication Studies from Clemson in December of 2015. Women’s tennis has now had postgraduate scholarship recipients in consecutive years, with Romy Koelzer being a recipient in 2015.

A two-time All-ACC Academic Team member, Roper is a veteran of 120 games for the Tigers. He has started every game in 2015-16 and is among the ACC leaders in assist-turnover ratio and steals per game. Roper needs just 65 points to reach 1,000 for his career. He earned his undergraduate degree in parks, recreation & tourism management  in December 2015. Roper completed his 400-hour internship requirement in Clemson’s athletic communications office and has aspirations of a career in athletic administration. Roper is the first men’s basketball player to receive a postgraduate scholarship since Tanner Smith in 2012.

Skochdopole is a three-time member of the ACC Academic Honor Roll and has twice been named a CRCA National Scholar-Athlete. In the previous two seasons she rowed primarily with the First Varsity 4+ and saw racing action split between the two-seat and bow. Skochdopole helped the boat to a first place finish at the Occoquan Sprints and a second place finish in the ACC/Big Ten Challenge in 2014-15. In addition, she also helps to coach a youth track & field team called “Indy’s Racing Cheetahs”. Skochdopole marks the eighth Clemson rower to receive the Weaver-James-Corrigan award and the first since Becca Brown in 2012.

Dewar, Roper and Skochdopole, along with the other 49 ACC student-athletes, will be honored at the ACC Postgraduate Luncheon held April 13 at the Grandover Resort in Greensboro, N.C.