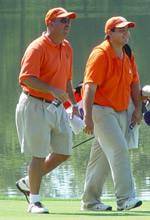 Clemson, Georgia Tech and Wake Forest all had three selections to the All-ACC team. It marked the eighth time in the last nine years that Clemson has had at least three players named to the 12-man team. It was the third year in a row that Jones had been selected, the second year in a row for Hendrix and Ferguson.

Hendrix leads the Clemson team in stroke average this year with a 70.83 figure. He has finished in the top 10 in six of his 10 events and has a team best 19 rounds under par. The native of Aiken, SC won the Puerto Rico Classic in February and the Augusta State Intercollegiate in April. A member of the 2003 United States Walker Cup team, Hendrix is a finalist for the Ben Hogan Award. He is currently ranked ninth in the nation by the Sagarin computer ranking.

Jones has a 72.84 stroke average this year for 11 tournaments. The native of Florence, SC has three top 10 finishes and 13 rounds at par or better. His final round 69 was a key to Clemson’s ACC Tournament championship this year. If Clemson can finish in the top three at the NCAA Tournament this year he will become the first Clemson athlete in history to start on four teams that finished in the top three in the nation.

Both Jones and Hendrix will graduate from Clemson on Friday, May 7.

Ferguson is a junior from Seneca, SC and has been Clemson’s most consistent golfer this year. He has finished in the top 20 in 10 of his 11 events, including four top six finishes. He had a 10-under-par 206 at the ACC Tournament, Clemson’s low score. He also finished third at the Atlanta Intercollegiate when he shot a 208 for the three rounds. His 71.09 stroke average is second best on the Clemson team. He is currently ranked as the 11th best collegiate golfer in the nation by the Sagarin computer ranking.

All three of Clemson’s All-ACC selections are ranked in the top seven in Clemson history in career stroke average. Ferguson is fourth (71.97), Hendrix is fifth (72.18) and Jones is seventh (72.67). Clemson is off until May 20-22 when it will compete in the NCAA Tournament at a regional site to be announced on May 10.

Penley was named ACC Coach of the Year for the sixth time. He was also selected in 1987, 1996, 1997, 1998, and 2003. He guided Clemson to the ACC Championship last month, the second straight year and eighth time the Tigers have won the league title under his direction. The ACC tournament victory was Penley’s 55th as Clemson head coach.

Bill Haas of Wake Forest was named the ACC Player of the Year and Roberto Castro of Georgia Tech was named the conference’s top rookie.