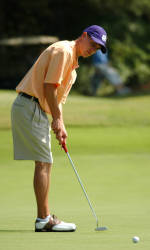 Clemson, SC — Three members of the Clemson men’s golf team have been named to the Ping South All-Region team as chosen by the Golf Coaches Association of America. The Tigers selected were sophomores Sam Saunders and Kyle Stanley, and junior Phillip Mollica. All three helped the Tigers finish fifth at last weekend’s NCAA Championships at Purdue University. The All-America teams will be announced on Friday, June 6.

Stanley led Clemson in stroke average this year with a 72.44 figure. He finished seventh at the NCAA Championships, his second top 10 finish at that event. For the year, Stanley had a six top 10 finishes and 22 of his 36 rounds were at par or better. The native of Gig Harbor, WA was also named to the All-ACC team this year and finished 34th in the final Sagarin Computer rankings.

Earlier this week, Stanley qualified for the 2008 United States Open. He is just the second active Clemson golfer to appear in that national championship event.

Saunders ranked second on the team in stroke average this year with a 73.42 figure. He finished in a tie for 11th place at the NCAA West Regional in May, helping the Tigers to a third place team finish in the 27-team event. He shot a team best 74 on the final day of the National Championship at Purdue last Saturday to help the Tigers to the fifth place team finish.

Mollica, a native of Anderson, SC, was fourth on the team in stroke average this year with a 74.00 figure. He tied Saunders for team honors with the 11th place finish at the NCAA West Regional in May. He led the team in rounds in the 60s during the spring with six, and his third-place finish at the Hootie at Bulls Bay Tournament in March was the best individual finish by a Clemson golfer this year.