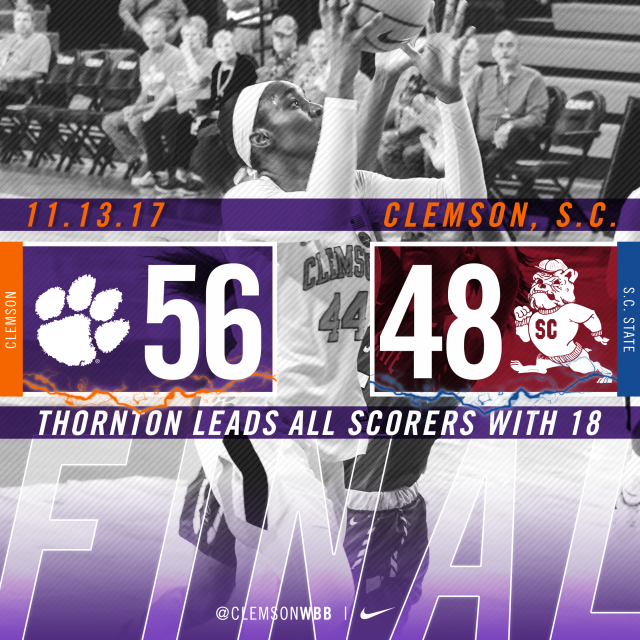 CLEMSON, S.C. – Sophomore Kobi Thornton shot 8-for-11 for 72.7% from field goal range and finished with 18 points to help fuel Clemson’s 56-48 victory over South Carolina State on Monday night at Littlejohn Coliseum. Meanwhile, junior point guard Danielle Edwards posted 16 points, including 12 in the fourth quarter, and her nine steals tied the Clemson record for steals in a single game. With the win, the Tigers improve to 2-0, while the Lady Bulldogs drop to 0-2 on the young season.

The Tigers got out to a hot start offensively, hitting seven of their first 10 field goals to take a 17-9 lead after one quarter. Kobi Thornton scored eight of the Tigers’ 17 points in the period. Clemson cooled off a bit in the second quarter, but still managed to lead by seven points at halftime, 26-19, and shoot 50% from the floor (11-for-22). In addition to Thornton’s eight points, Jaia Alexander and Alexis Carter each had five at the half, while Francesca Tagliapietra had four assists at the break.

The Lady Bulldogs’ Kyesha Lewis hit a three with 13 seconds left in the third quarter to cut the Tigers’ lead to 33-31, but Alexander made two free throws to put the lead back at four points at the end of the period. Clemson pulled away in the fourth quarter, fueled by a 12-point quarter by Danielle Edwards.

Thornton’s 18 points led the Tigers, while Edwards’ 16 was second-most on the team. Alexander finished with seven points and Carter had six to round out the scoring, while Thornton and Ivy Atkism led the team with six rebounds apiece.

Edwards tallied nine steals in the game, which tied the Clemson school record for steals in a single game. Four different players have recorded nine steals in a game previously for the Tigers, however, it had not been done in 30 years, when Ramona O’Neil picked up nine steals against Virginia on Feb. 14, 1987.

Clemson hosts the 2017 National Champion South Carolina on Thursday, Nov. 16 at 7 p.m. at Littlejohn Coliseum. The contest against the Gamecocks, currently ranked fourth by the AP and second in the USA Today/WBCA Coaches poll, is an Orange Out, and all Tiger fans are encouraged to wear orange. The first 600 fans in attendance will receive a free orange t-shirt.