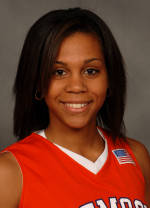 LOJA, ECUADOR – Clemson women’s basketball rising sophomore Sthefany Thomas helped lead the Argentinean national team to the finals of the South American Championships. The tournament was held in Loja, Ecuador from May 24-29. Thomas averaged 12.3 points in the six games for the runner-up Argentineans.

The team earned the right to compete in the FIBA Olympic Qualifier, which will be held in Madrid, Spain beginning June 9. Five of the 12 participating teams will go on to the Olympic Games in China later this summer.

Thomas scored 22 points on May 24 in leading Argentina to a 95-63 win over Chile. She then posted 16 on 5-for-10 shooting and had six steals as the Argentineans defeated Ecuador, 98-45. Thomas played just 14 minutes in a loss to Brazil on Monday but rebounded with 12 points and three rebounds in 17 minutes of action against Colombia (W, 89-43) on May 27.

She scored 17 points, second highest on the team, in Argentina’s 108-77 win over Venezuela on Wednesday but played just seven minutes in the final against Brazil.

Thomas averaged 8.0 points and 2.5 rebounds per game in her freshman season as a Lady Tiger. She played in all 31 games, earning the starting assignment nine times. Thomas, whose mother is a native of Argentina and father is from the state of Georgia, lived in Argentina for several years before moving to the United States.