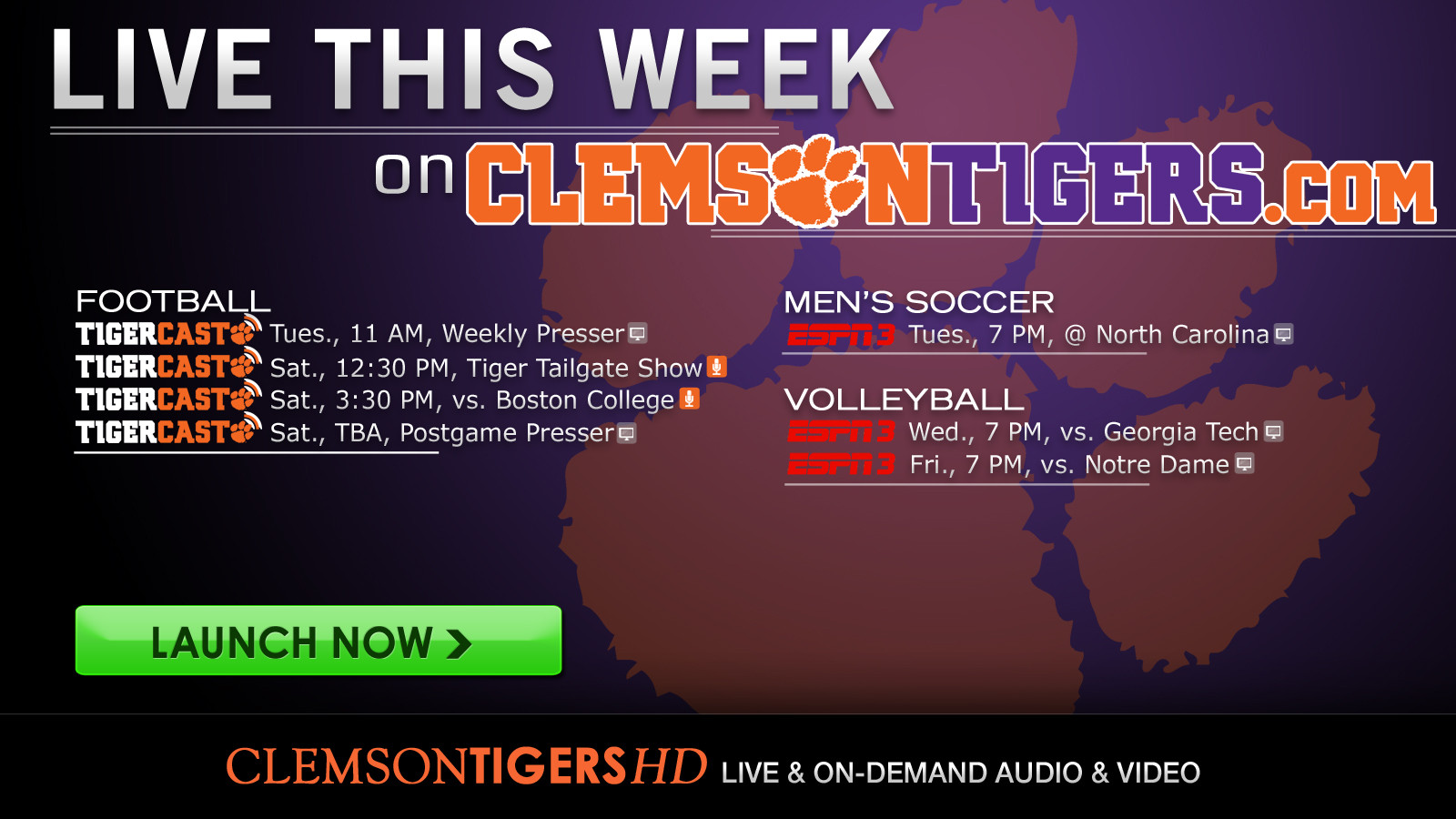 Cross Country (@CUTrackandField)The men’s and women’s teams competed at the Notre Dame Invitational over the weekend in South Bend, Ind.  Both teams competed in the gold division, with the women finishing fifth as a team and the men eighth. Cara Talty led the women with a 14th-place finish, while Aaron Ramirez topped the men’s squad by finishing 16th individually. The teams return to action on Saturday, Oct. 19 at the NCAA Pre-Nationals in Terre Haute, Ind.

Football (@ClemsonFB)Record: 5-0, 3-0 ACCClemson continued its winning ways over the weekend at Syracuse with a 49-14 victory at the Carrier Dome. In Clemson’s first trip to the facility, the Tigers scored 21 first quarter points to take control of the game behind Tajh Boyd, who threw for a school record 455 yards on the day. He also tied his own Clemson record with five touchdown passes, and his 261.9 passing efficiency was the best in Clemson history and the best in the nation this year given a minimum of 20 attempts.

Vic Beasley led the defense with two sacks and four total tackles for loss as the Clemson defense held the opposition to 14 points or less for the fourth straight game, the longest streak of its kind in 13 years.

Clemson held its number three position in the AP poll and number four in the USA Today poll with the victory.  Boston College comes to Clemson for Hall of Fame Day this Saturday at 3:30 p.m. The game will be televised by ABC to much of the eastern part of the nation with the remainder of the country getting the contest on ESPN2.

Women’s Golf (@ClemsonWGolf)Ashlan Ramsey was named the ACC Golfer of the Month for September. It was a rewarding ending to the first month of play for Ramsey and the Clemson women’s golf program. Ramsey finished second at the Cougar Classic to start the month, then won the Furman Invitational by three shots in the second tournament. She played six rounds overall and all were at par or better. She was nine under par for the six rounds.  The team will be back in action Friday at the Ruth’s Chris Invitational in Chapel Hill, N.C.

Men’s Soccer (@ClemsonMensSoc)Record: 7-2-1, 2-2-1 ACCThe men’s soccer squad dropped a heartbreaking 2-1 overtime decision Friday night to No. 2 Notre Dame. The Tigers tied the match in the 88th minute before allowing the game-winner in the second minute of sudden-death overtime.  The Tigers return to action with two matches this week against top 10 foes, first at No. 4 North Carolina on Tuesday, followed by a Friday tilt at No. 10 Wake Forest.

Women’s Soccer (@ClemsonWSoccer)Record: 6-4-3, 3-3-1 ACCThe Clemson women’s soccer team lost two games to top-ranked ACC teams on the road last week, falling 1-0 in overtime at No.12 Virginia Tech on Thursday and 3-0 at No. 1 Virginia on Sunday.  The Tigers have a bye this Thursday and then will travel to Raleigh, N.C. to face NC State on Sunday.

Women’s Tennis (@ClemsonWTennis)Five members of the Women’s Tennis program competed in the Duckworth Family Fall Classic this past weekend. Newcomers Jessy Rompies and Joana Eidukonyte claimed the flight one doubles championship, while Tristen Dewar and Ani Miao claimed the flight two title. Dewar finished as the runner-up in flight two singles, and Rompies was runner-up in flight three singles. The Tigers are off from competition until late Oct. when they travel to the ITA Carolina Regional Championships in Chapel Hill, N.C.

Volleyball (@ClemsonVB)Record: 7-8, 1-3 ACCThe volleyball team took a pair of losses this weekend to the top two teams in the ACC. Clemson fell in four sets to Miami, and dropped a heartbreaker to #18 Florida State on Saturday. The Tigers will play on Wednesday and Friday of this week in Jervey Gym. Both matches will be on ESPN3.