SPORT UPDATESBaseballRecord: 13-13, 5-7 ACCClemson won two of four games last week, including a 19-2 victory at Western Carolina on Tuesday. The Tigers returned home to win one game in the weekend series against Wake Forest. Eli White’s three-run homer and Zack Erwin’s strong performance on the mound led the Tigers to a 6-2 victory Sunday. Steven Duggar has reached base safely in 28 straight games dating back to 2014. The Tigers continue their homestand with their first five-game week of the season. Clemson hosts Furman and Presbyterian before North Carolina comes to town over the weekend.

Rowing (@ClemsonRowing)For the second time in as many regattas, the Clemson rowing team had a successful outing. All eight Tiger boats finished either first or second in the six races held on Sunday afternoon at the Occoquan Sprints in Fairfax Station, Va.In Varsity Eight action, the two Clemson boats each won their respective heats to advance to the final where they finished 1, 2. Another Tiger 1, 2 finish highlighted the V4+ Final. Clemson rowed to victory with a time of 8:16.90 while the other Tiger crew came in second at 8:22.18. Sophomore Sabreena Cole and freshman Sarah Decker earned the victory in the 2-, defeating William and Mary and Liberty. The Tiger duo finished with a time of 10:06.70. Clemson’s 3V8+ rowed to a second place finish behind North Carolina’s 2V8+ who posted a time of 7:19.24. The Tigers’ time of 7:30.16 bested the third place George Mason 3V8+ who completed the race in 7:40.06.Clemson will be back in action in Virginia next week as the Tigers compete in the ACC/Big Ten Challenge on Saturday, April 4 in Charlottesville. The Tigers will face off against some of the top schools in the country including Ohio State, Michigan and Virginia.

Men’s Soccer (@ClemsonMSoccer)The Clemson men’s soccer team hosted its annual alumni weekend on Friday and Saturday, holding a golf tournament and reception on Friday, followed by a spring game, alumni game and season awards banquet on Saturday. The Tigers faced Atlanta Silverbacks FC in the spring game, falling 1-0 to the U.S. Soccer Division II pro team in a very competitive contest in which freshman Michael Melvin hit the post, missing a goal by just inches. At Saturday night’s banquet, the team honored all of its award winners, which included MVP Paul Clowes, and members of the team and staff were presented with their 2014 ACC Championship rings. Clemson plays its first spring game against a collegiate opponent this Friday, April 3 when it hosts UNC Greensboro at Historic Riggs Field at 5 p.m.

Men’s Tennis (@ClemsonMTennis)Record: 10-11, 1-6 ACCThe Clemson men’s tennis team fell to two top-25 opponents at home over the weekend, No. 4 Duke (5-2) and No. 23 Louisville (5-2). The Tigers won the doubles point against the Blue Devils, with wins by Alejandro Augusto and Hunter Harrington at No. 1 and Hampton Drake and Christian Harris at No. 3. Augusto and Harrington’s win was an upset over the 12th-ranked doubles team in the nation. Luke Johnson won both of his singles matches on the weekend, and improved to 7-1 in his last eight contests. Harrington won a marathon singles match against #123 Alex Gornet of Louisville, 6-7(3-7), 7-6(8-6), 1-0 (10-6). The Tigers have two home matches this weekend, vs. NC State Friday at 11 a.m. and vs. #12 Wake Forest Sunday at 11 a.m. When Clemson hosts the Demon Deacons on Sunday, it will be its sixth top-30 opponent in the last eight contests.

Women’s Tennis (@ClemsonWTennis)Record: 11-7, 6-3 ACCCurrent Ranking: 19thThe 19th-ranked Clemson women’s tennis team nearly upset second-ranked and undefeated North Carolina in Chapel Hill on Friday, but ultimately fell 4-3, before rebounding with a 7-0 sweep of NC State on Sunday in Raleigh. Tristen Dewar, Joana Eidukonyte and #84 Beatrice Gumulya were all 2-0 in singles play on the weekend, and each player recorded an upset over a higher-ranked Tar Heels singles player. Dewar defeated her 78th-ranked opponent, #19 Eidukonyte downed the #17 player in the nation and #84 Gumulya topped her 18th-ranked opponent, all three winning in straight sets. After three straight road matches the Tigers return home this weekend to host Pittsburgh on Friday at 2:30 p.m. and Georgia Tech on Saturday at 2:30 p.m.

Track & Field (@ClemsonTrackXC)The Tigers competed at the Texas Relays and Crimson Tide Invitational last weekend. Samantha Elliott was runner-up at Texas in the women’s 400 hurdles with the third-best time (57.54) nationally, No. 6 in Clemson history. Justin Johnson also recorded a personal best in a third-place finish in the 110 hurdles. His time of 13.69 also ranks third in the nation. In the field, Torian Ware cleared the high jump bar at 7-1 to take fourth at Texas. The Tigers return to action Friday and Saturday, April 3-4, at the Pepsi Florida Relays in Gainesville. 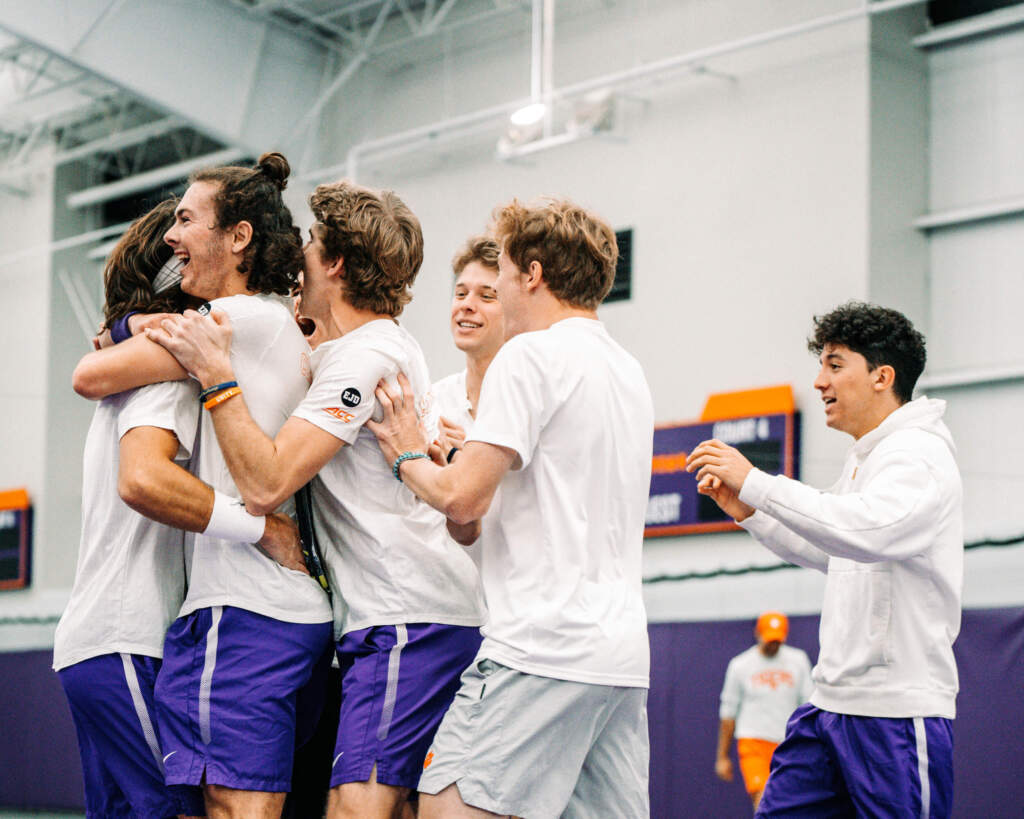