Baseball (@ClemsonBaseball)Record: 11-11, 4-5 ACCClemson earned two wins in four games away from home last week, including two victories at Virginia Tech over the weekend. Matthew Crownover pitched 8.1 scoreless innings Friday, enabling Chris Okey to hit a game-winning grand slam in the 10th inning. The Tigers pounded out 21 hits, their most since 2011, in a 15-8 victory over the Hokies on Saturday before falling 4-3 in 12 innings Sunday. Okey led the Tigers at the plate by going 6-for-18 with a homer, double and seven RBIs in four games last week. Jack Leggett earned his 400th win against an ACC team as Clemson’s head coach as well. The Tigers travel to Cullowhee to face Western Carolina on Tuesday before hosting Wake Forest over the weekend. Starting with the Wake Forest series, Clemson is scheduled to play 15 of 18 games at home.

Men’s Golf (@ClemsonMGolf)Current Ranking – #30 GolfweekClemson finished ninth out of 15 teams at the Linger Longer Invitational at Reynolds Plantation in Greensboro, Ga. The field included seven top 32 ranked teams, including third-ranked Texas, who won the event.The Tigers were led by Miller Capps, who had three consecutive under-par rounds and finished with a 212 total for the 54 holes, good enough for 12th place. Capps now has 13 under-par rounds the year.Clemson returns to the course April 4-5 at the 3M Augusta Invitational.

Rowing (@ClemsonRowing)After a successful opening weekend, the rowing team had a week off from competition, holding practices during spring break. The team returns to action on Sunday when they travel to Virginia for the Occoquan Sprints.

Men’s Soccer (@ClemsonMSoccer)The Clemson men’s soccer team will host its second spring game on Saturday, March 28 at 1 p.m. at Historic Riggs Field. Admission is free and open to the public. The Tigers will face Atlanta Silverbacks FC of the North American Soccer League, a Division II professional league sanctioned by U.S. Soccer. It is Clemson’s second-straight contest against a professional team, as the team previously faced Charleston Battery, falling 2-0 in its first game of the spring season.

Men’s Tennis (@ClemsonMTennis)Record: 10-9, 1-4 ACCThe men’s tennis team picked up its first ACC win of the season on Friday with a 4-3 victory on the road against Miami. The Tigers clinched the match with three wins at the bottom half of the singles lineup. On Sunday, the Tigers dropped a 6-1 decision to No. 27 Florida State in Tallahassee. Clemson clinched the doubles point against the Seminoles after Luke Johnson and Robert Dudley rallied from being down 2-6 to win the match 8-6. Johnson also split a pair of singles matches this weekend, improving to 5-1 in his last six singles matches. Clemson begins a four-match homestand on Friday at 2:30 p.m. when sixth-ranked Duke comes to town. Including the Blue Devils, three of the Tigers’ next four opponents are ranked in the top 30 nationally.

Women’s Tennis (@ClemsonWTennis)Record: 10-6, 5-2 ACCCurrent Ranking: 15thThe 15th-ranked Clemson women’s tennis team split a pair of ACC matches over the weekend. On Friday at home, the Tigers fought hard but were edged by No. 8 Virginia, 4-3. In the match, Clemson’s Romy Koelzer, ranked 43rd in the nation, defeated the top-ranked singles player in the country, the Cavaliers’ Julia Elbaba, in straight sets (6-4, 6-1). On Sunday, the Tigers rebounded to defeat Syracuse on the road. Clemson won 7-0 for the third time in four matches. The team hits the road again next week for two matches in the state of North Carolina. The Tigers face undefeated and No. 1-ranked North Carolina on Friday, March 27 in Chapel Hill, before heading to Raleigh to take on NC State on Sunday, March 29.

Track & Field (@ClemsonTrackXC)The Tigers opened the outdoor season over the weekend at Coastal Carolina’s Shamrock Invitational. James Plummer won the men’s discus in impressive fashion, posting a personal best mark of 192-10 — No. 2 on record at Clemson. Torian Ware captured the men’s high jump with the nation’s third-best mark (7-1.75), while Lauren Terstappen returned for her final season by claiming the Shaw Stadium record (13-1.5) in a women’s pole vault win. The Tigers return to action this week in two different meets, the Texas Relays in Austin and Alabama Relays in Tuscaloosa. 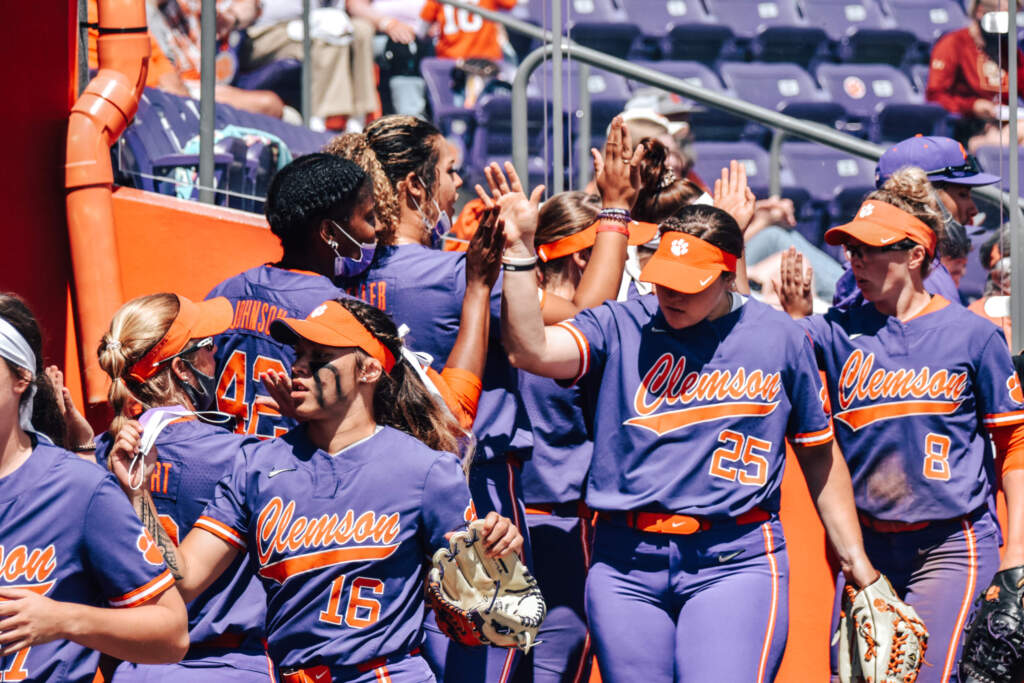 Softball
Rittman Earns Career Win No. 800 in Extra-Inning Victory Over BC