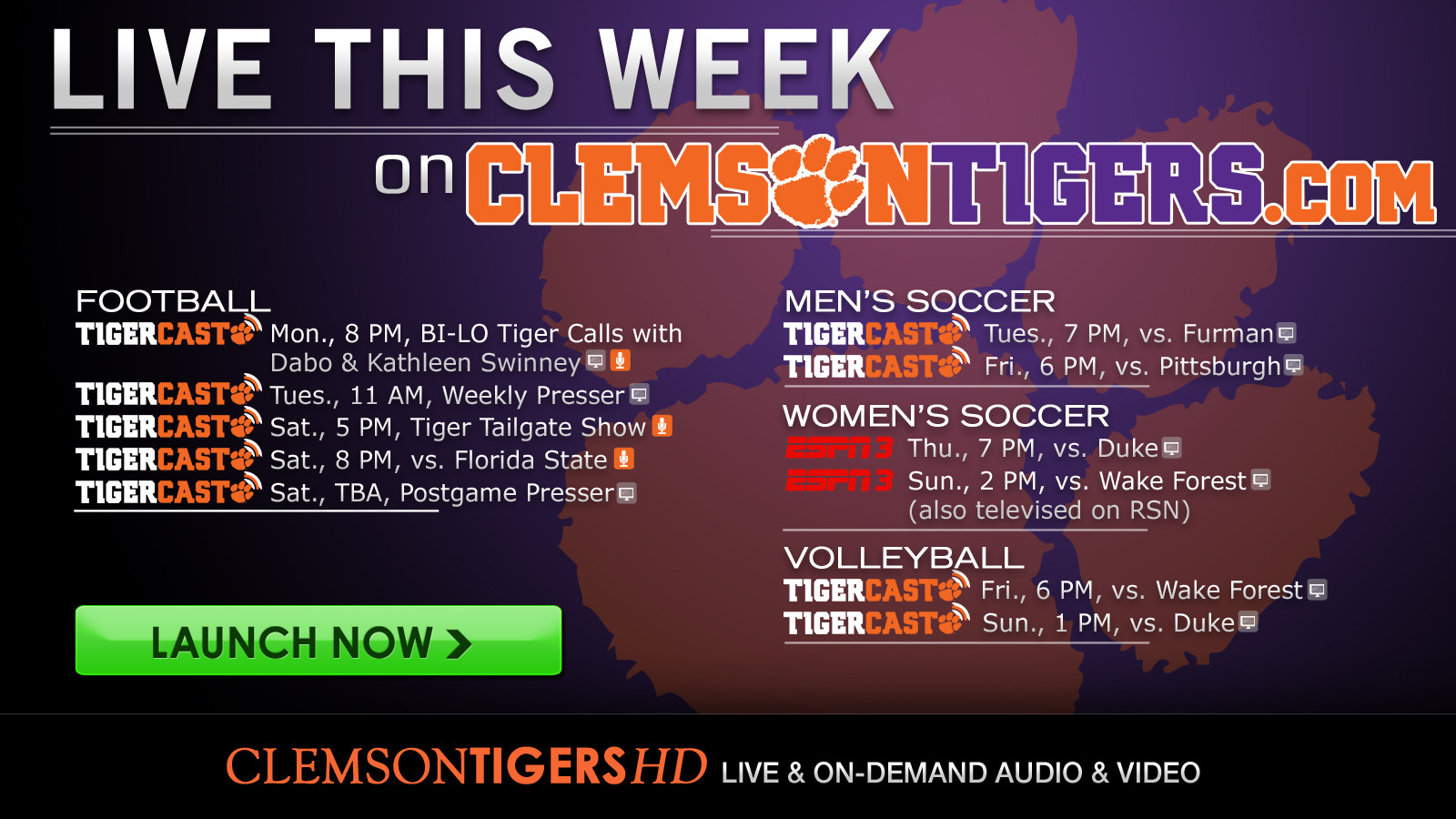 Pink Initiatives – Football, volleyball and women’s soccer each have designated events this week to support Breast Cancer Awareness. Details of each program’s initiatives are below.

Sunday, Oct. 201 p.m. – Volleyball vs. Duke – TigerCastDig Pink – All proceeds will benefit the Side Out Foundation for Breast Cancer Awareness2 p.m. – Women’s Soccer vs. Wake Forest – RSN/ESPN3Free “Clemson United” silicone wristbands for the first 150 fansRowing at Head of the Charles (Boston)Men’s Golf at US Collegiate (Atlanta, Golf Club of Georgia)

Football – Saturday’s contest against Florida State will be the first “Pink Game” for Clemson football. The athletic department and head coach Dabo Swinney’s All In Team Foundation, along with Coca-Cola Consolidated, OOBE and St. Francis Hospital, have unveiled the exclusive 2013 Breast Cancer Awareness Tiger Paw pin, which is available online at ClemsonTigers.com.

Volleyball – Sunday’s match against Duke has been designated the “Dig Pink” match, and all proceeds will benefit the Side Out Foundation for Breast Cancer Awareness. At the Sunday match, the team will hold an auction featuring volleyball apparel, and coach-autographed football and soccer items.  To donate, visit https://www.side-out.org/cb/campaigns/campaign/6844.

Also, there is a rebate night leading up to the Dig Pink match Wednesday, October 16th at Wingin’ It from 5-10 p.m. (10% of customer tab goes to the Side Out Foundation for Breast Cancer Awareness).

Women’s Soccer – The Clemson women’s soccer team hosts Duke on Thursday, in a game designated as a “Pink Game.”  There will be promotions and contests for fans in attendance at the game, and donations will be accepted on behalf of Red Card Cancer.  Fans unable to attend the game can donate to Red Card Cancer online, by text or by mail.  Click HERE for more information.  Be sure to indicate “Red Card Cancer – Clemson Women’s Soccer” on your donation form.

Cross Country (@CUTrackandField)After a weekend off, the men’s and women’s teams return to action Saturday, Oct. 19 at the NCAA Pre-Nationals in Terre Haute, Ind.

Diving (@ClemsonDiving)The women’s diving team will hold a diving exhibition at McHugh Natatorium on Friday at 5:15 p.m. The team will give fans insight in the sport of diving by showcasing different dives in an entertaining format. The Tigers will officially kick off their season the following weekend on Saturday, Oct. 26 when they host Georgia Southern and Richmond at 1:00 p.m.

Football (@ClemsonFB)Record: 6-0, 4-0 ACCClemson defeated Boston College 24-14 on Saturday. The win gave the Tigers a sixth straight win to open the season, the second time in the last three years Clemson has won at least six games to open the season. The victory sets up the first meeting of top five teams in the 72 years of play at Memorial Stadium on Saturday against Florida State.  It will be just the fourth meeting of top five ACC teams in history. Vic Beasley was the winner of the Leather Helmet Award as the MVP of the Boston College game.  The junior had his ninth sack of the year, two total tackles for loss, five tackles and the first touchdown of his career.

Clemson’s offense scored just 17 points, but the unit had 496 yards of total offense.  Tajh Boyd became Clemson’s career passing offense leader as he had 334 yards and now is just 164 shy of the 10,000 yard mark in his career. Sammy Watkins had 101 receiving yards, his fourth 100-yard game this year.

Men’s Golf (@ClemsonMensGolf)Clemson’s men’s golf team will return to action this weekend at the US Collegiate in Alpharetta, Ga. The Tigers have been off for almost a month after playing three September tournaments for the first time in their history. Clemson has won the US Collegiate twice at the Golf Club of Georgia and it is annually one of the top fall tournaments of the year.

Clemson will take a new lineup to this event. Miller Capps, Cody Proveaux, Stephen Behr and Carson Young return to the lineup.  Billy Kennerly, a native of Alpharetta, will return to his hometown to play for the Tigers for the first time this year. He missed the first couple of tournaments this year with an illness. He finished last year with a record five consecutive rounds in the 60s.

Women’s Golf (@ClemsonWGolf)Clemson women’s golfer Ashlan Ramsey won the Ruth Chris Tar Heel Invitational over the weekend by four shots.  It was quite a performance as the 18-team field had 12 top 25 teams competing, including some of the top players in the nation.

Ramsey had rounds of 68-69-70 in finishing with a nine under par 207.  She is now 20 under par for the year and has shot par or better in each of her nine rounds.  Clemson as a team finished tied for fifth with Alabama and South Carolina.

Clemson will next be in action Oct. 25-27 at the Landfall Tradition in Wilmington, N.C.

Rowing (@ClemsonRowing)The women’s rowing team will compete in the Head of the Charles in Boston on Saturday morning. It will be the Tigers’ second-consecutive appearance at the event following a 13th-place finish by the Varsity 4+ crew last fall. The Clemson squad recorded three first-place finishes earlier this fall at the Head of the Oklahoma.

Men’s Soccer (@ClemsonMensSoc)Record: 8-2-2, 3-2-2 ACCThe men’s soccer earned four points in two road matches against top 10 opponents last week, moving up to fourth in the conference standings. Clemson scored in the second minute of the game and the second minute of overtime on Tuesday to upset No. 6 North Carolina on the road. Ara Amirkhanian’s scored the game winner and Thomas McNamara scored on the rebound off a penalty in the second minute.

Sunday, Clemson played its third consecutive overtime, earning a draw at 10th-ranked Wake Forest. McNamara assisted T.J. Casner’s first goal of the season. The equalizer came in the 37th minute as the Tiger defense held on for the point.

Women’s Soccer (@ClemsonWSoccer)Record: 7-4-3, 4-3-1 ACCThe Clemson women’s soccer team won an important road game in the ACC on Sunday, claiming a 1-0 victory over NC State in Raleigh. Senior Tabitha Padgett scored the game-winning goal on a penalty kick, while freshman goalkeeper Kailen Sheridan posted five saves, including one on an NC State penalty kick, to record her sixth solo shutout of the season. The Tigers host to two critical ACC home games this week, against Duke Thursday and No. 11 Wake Forest Sunday.

Thursday’s game between Clemson and Duke is designated as a “Pink Game.” There will be promotions and contests for fans in attendance at the game, and donations will be accepted on behalf of Red Card Cancer.

Volleyball (@ClemsonVB)Record: 9-8, 3-3 ACCThe Volleyball team swept both Georgia Tech and Notre Dame, 3-0, in home matches in Jervey Gym last week. Mo Simmons led the way, averaging 6.33 kills and 4.5 digs per set. She leads the ACC in kills and points per set. Freshman Leah Perri also had 20 kills without an error on the week. The Tigers play home matches this week against Wake Forest on Friday and Duke on Sunday. Sunday’s match has been designated as the “Dig Pink” match.