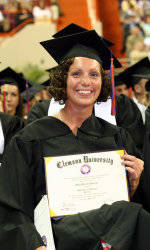 The women’s swimming and women’s track programs had the most graduates on Friday with six each, while the rowing program had five. The football team and women’s soccer teams had four apiece.

The football players who earned degrees on Friday were Tim DeBeer, Donnell Clark, Chris Carey and Bromell. Sixteen of the 20 senior lettermen on the 2006 Clemson team have earned degrees and the other four are still in school.

Bromell was a member of the Clemson team for the 1996 and 1997 seasons under Tommy West. He played eight years in the NFL before returning to finish is degree requirements in 2006. His graduation on Friday will give Clemson an additional APR point when the next calculations are released next May. Bromell, who earned his degree in sociology, is the third NFL veteran in the last three years to return to Clemson and earn a degree. Levon Kirkland and Michael Dean Perry returned to Clemson after Pro Bowl NFL careers to earn degrees since 2005.

Golfer Nick Biershenk received his degree in sports management on Friday. He is the second member of his family to play on the Clemson golf team and earn a degree. His brother, Tommy Biershenk, graduated 10 years ago after lettering for four years on Larry Penley’s squads from 1993-96.

Clemson women’s tennis player Maria Brito earned her degree and played in the NCAA Tennis Tournament for the Lady Tigers on the same day. Clemson defeated Coastal Carolina 4-0 in the opening round. Brito was in the lineup at number-five singles.

Clemson Student Athletes Who Received Degrees on May 11, 2007