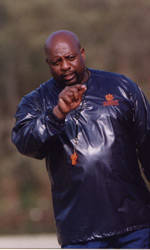 Coach Smith, Is there any particular reason the D-Line cannot get any pressure on the opposing QB? Is it talent level? Scheme? or something else?Alan Ryder Aiken, SC

I think it just maturity, I think as they mature the pressure will get better. I don’t think it has anything to do with scheme or talent, I just think they need to mature and get confidence in their ability.

Coach, When will Clemson recruit a huge defensive “presence” like a William Perry or a Chester McGlockton? The kind of disruption those guys caused made defense exciting and fun to watch!!Tom Nadeau Charlotte, TN

Well, I wasn’t here when those guys played, so I wouldn’t know what they looked like as a freshman. But I don’t think they came in like that as a finished product. I would think that Chester McGlockton and William Perry probably by the time they were juniors and seniors probably looked liked you remember them. But, we have a big kid in Donnell Washington and maybe by the time he is a junior or a senior he will make people remember those guys.

Thielen, What is your take on the postponement of the game this weekend?Jake Andrews Alvin, NC

I am going to stick with the officials, the administration, and the conference. They decided for us not to play, and I would have to agree with that.

Coach, How do you work on improving the DL’s pass rushing in a four man rush situation? Is it more technique or desire in that situation?Calvin Craft Athens, GA

Coach Smith, What are some of the things that you teach defensive linemen that maybe the average football fan wouldn’t know?Nick Jebaily Clemson, SC

Thielen, What is the one team that you personally really look forward to preparing for and coaching against this season and why?Kevin Darnell Smithfield, NC

Coach, How much did it hurt the DL to lose Lewis and White?Billy Waters Richmond, VA

From a depth perspective, it might have hurt, but if the kids are not good citizens, then I don’t think it hurt that much. Character is a part of football, and based on what happened, these kids proved that they didn’t have good character. I think that the young guys will fill in fine.

Thielen, Who do you see as the future of the DL? Fountain, Whipple, Bennett, etc?Wes Slemmons Greenville, SC

I don’t ever think there is one individual. This is a team sport, so I don’t ever like to label one guy as the future. I think that if we have eight defensive linemen who are playing well, then we will have a great future here at Clemson.

Theilen, When recruiting, if you couldn’t have both, would you rather have speed or size?Ben Dutch Hilton Head Island, SC

I would take speed. Speed gives you a chance to make mistakes and make up for it. Just size won’t do that. If you have the ability to run, you can make more mistakes and get away with them. The slower you are, the less mistakes you can make.

Thielen, Does the DL feel a lot of pressure knowing that the secondary is so inexperienced?Tim Gilbert Norcross, GA

We are a team. We can’t do anything more than do our part. And our part is to put pressure on the quarterback, sack the quarterback, and stop the running game along with the linebackers and the secondary. I think it is a team sport. I don’t think you can separate the defensive line, from the linebackers, or the secondary. We are going to have success together or we are going to fail together.

Next week’s guest on “Ask The Tigers” is Tiger defensive lineman Nick Eason.