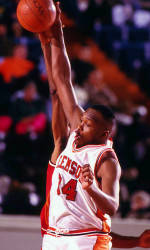 Sharone Wright will stick to basketball, thank you very much. But with his reputation, shouldn’t somebody draft him for politics? Cynics might say he’d make a fine obstructionist legislator.

Clemson’s ACC Legend could reject attempts with the best in Washington in a career that took him from Macon, Ga., to Tigertown and the NBA. He still stands 10th in ACC history in total blocks (288) and blocks per game (3.13) some 18 years after his final Tiger contest. His timing and work ethic made him the sixth overall pick of the 1994 NBA draft.

“I think it comes back to when I was a younger kid,” he said. “I worked out with a former Laker, Myles Patrick, who was a really big influence on me. He would lean on me every time I jumped. I learned the rules of shot-blocking and positioning really early.”

Click here to read the complete feature article on theACC.com.