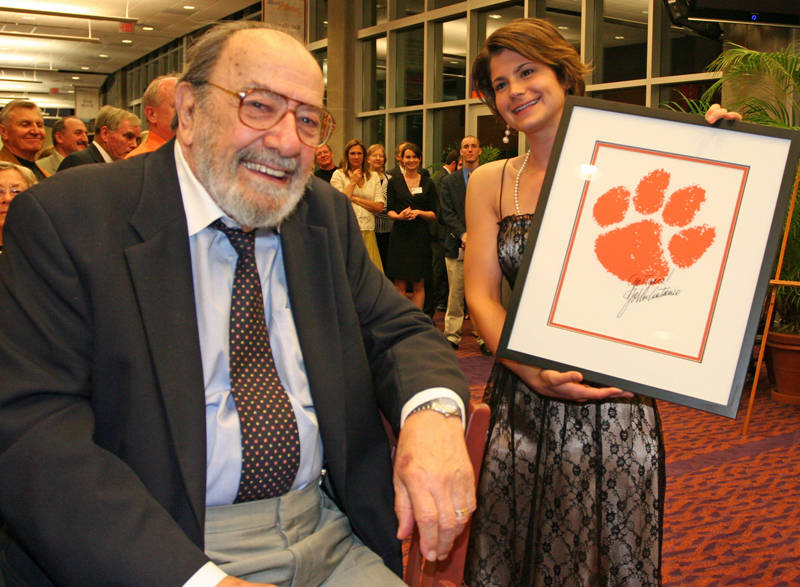 The Tiger Paw might be the most widely recognized school symbol in the nation.  It is something unique to Clemson and Tiger fans are very proud of the logo. It’s been Clemson’s logo since 1970 and it as much a part of Clemson as some of the legendary heroes that brought fame to the school in its athletic history.Dr. Robert C. Edwards, then Clemson president, decided in 1969 that he would like “to upgrade the image of the university” and hired Henderson Advertising Co. in Greenville, SC to work on this idea.  Company President Jimmy Henderson, a Clemson graduate in 1944, had an idea of what Edwards was thinking.   Henderson put together a team to work on the “Clemson Project.” The team was composed of vice president Fred Walker, Account Supervisor Paul Seabrook and Creative Designer and Artist John Antonio. Arlene Ramsey was the secretary. Among the possible changes being discussed were new uniforms and a new logo that would not replace the Tiger, but complement it.The IdeaAfter about six weeks of thinking out loud on several angles, Henderson presented what was first called a “tiger track” as the new logo.  Henderson’s people wrote to every school in the nation that had Tigers as its nickname, asking for a picture of its mascot.  After most of them had responded, the conclusion was reached that a Tiger is a Tiger, regardless if it was a Persian, Bengal, or Sumatra.      Several other ideas were kicked around, one being the impression of a Tiger’s foot or paw.  In order to get the real thing, Henderson wrote the Museum of Natural History in Chicago asking for a plaster of Paris cast of the imprint of the tiger’s paw.   The imprint was changed to a print, tilted about 10 degrees to the right and presented to the Clemson committee working with Henderson.  John Antonio is given credit of coming up with the idea.  Antonio was an innovative account executive with Henderson Advertising.Antonio went to work and in a few days, he reported, “I think we have a winner.”   A few more days of work and the final project was ready to be presented.   Getting ApprovalNow the task was to sell the idea to the Clemson committee A meeting was set up with the Clemson Committee around the first of July in 1970.   The following were in attendance, from Henderson Advertising, Fred Walker, Paul Seabrook and John Antonio. From Clemson University, Athletic Director, Frank Howard; Assistant Athletic Director, Bill McClellan; Head Football Coach Hootie Ingram; and Head Basketball Coach Tates Locke.  Also in attendance from Clemson was Dean Walter Cox; Executive Director of IPTAY, Gene Willimon; and several assistant coaches for basketball and football. Antonio made the presentation using examples he had put together with the paw on stationary, t-shirts, sweaters, auto tags, etc. He also had paintings of the paw on the football field and the basketball court.  Frank Howard did not seem to be impressed and asked where was the other presentation. Then Antonio opened a box and took out an orange football helmet with a white Tiger Paw on both sides.   Frank Howard’s attitude changed immediately and soon the Paw was approved. Another test that helped win approval was when logos from different schools were held up several feet away.  Many could not recognize the logos, but when Antonio’s brainstorm was held up it was immediately recognized as the new Clemson Tiger Paw, without any hesitation.   Further approval came from Dr. Edwards and the Board of Trustees.  Spreading the News and Making TracksNow the news had to be spread about the Tiger Paw.  Football coach Hootie Ingram, basketball coach Tates Locke, All-ACC tailback Ray Yauger, and Wright Bryan, the university’s Vice President for Development, made a one-day whirlwind trip to six cities on Tuesday, July 21, 1970—Florence, Columbia, Charleston, Greenville, Charlotte, and Atlanta.    They made the excursion in around nine hours.   The purpose of the trip was to introduce the two new head coaches, Ingram and Locke to the general public and to show off the new Tiger Paw.Ironically assistant sports information director and later promotion director Jerry Arp was hired at Clemson two days earlier. He is credited with emphasizing to Tigers fans to wear orange, and he also was a big factor in making the Tiger Paw famous during its infancy.According to the news release the six-city tour was “an opportunity to hear how the Clemson Tiger is alive in a ferocious way, stalking the campus with a new version of the traditional Clemson spirit.”At each stop, they held a press conference.  Bryan told the people at each press conference: “At any university, from time to time there needs to be some symbol which keeps the whole thing together, and the university hierarchy believes that the paw is the answer.”“Symbols like the tiger paw won’t help us win football games,” Ingram said at one of the stops, “but we hope they will retain the enthusiasm Clemson people are known for around the country.”   Sadly, Antonio died May 30, 2013 at the age of 83.   He definitely saw how his idea had grown and to became an integral part of Clemson University. Today, Tiger Paws are found everywhere in Clemson and around the country on every imaginable surface and merchandise. They are even on the roads leading into Clemson. The Tiger paw and Clemson definitely go hand in hand with one another after 44 years of existence or should it be hand and paw with each other?