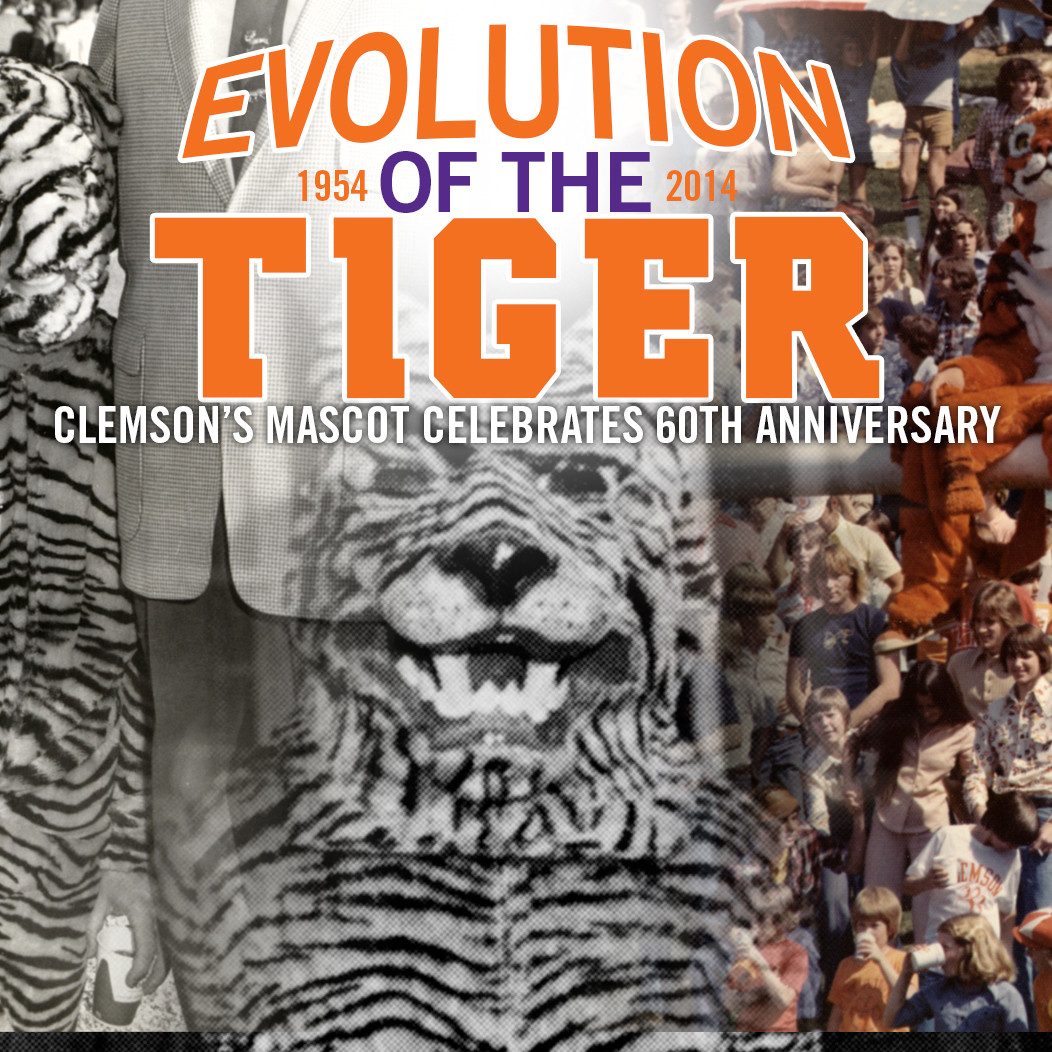 It has been a part of Clemson for generations, and this year marks the birthday of a special tradition, The Clemson Tiger mascot.

The Clemson Mascot turns 60 in 2014. Since 1954, a student has dressed up as a Tiger entertaining fans, spreading good cheer, and creating smiles and laughter to the Tiger faithful young and old.

This Homecoming weekend, former Tigers are having a reunion to celebrate 60 years of the mascot.  Gabby Hayes was the first Tiger in 1954 and former Tigers from each of the previous six decades will be on hand during homecoming weekend exchanging stories, showing photographs, and reliving their experiences as the Clemson Tiger.

The oldest Tiger that will be visiting will be Billy McCown.  He was the first Tiger to be seen on national television. He was the Clemson mascot when The Tigers played in the 1959 Sugar Bowl and that game was on the NBC network when Clemson played #1 LSU in New Orleans.

Other dignitaries among the Tigers will include Stuart McWhorter who endowed the Tiger mascot through IPTAY.   Zach Mills, who started the push up tradition, and Ricky Capps, who is known for doing the most push-ups in a single game, will both be in attendance.  Jordan Powell still borrows the Tiger suit and visits as many hospitals as possible will also be here for the festivities.

The former Tigers will have a tailgate in front of the indoor football facility and then will be introduced in pregame ceremonies in Death Valley.

Everyone has seen the Tiger in many different locations. He is not only at athletic contests, but also at parties, weddings, and social events.  When and wherever he is seen, it symbolizes Clemson.  The Tigers have also made appearances at hospitals and children’s homes bringing happiness and encouragement to those that need a smile and a big hug.

“There’s a common bond that we share as Clemson Tigers,” said Mike Bays who played the Tiger in the mid-1990s.   Bays is heading up the reunion of Tigers this weekend and thanks to his hard work, as many as 40 former Tigers are expected to make the trek back to Clemson during homecoming weekend.

When talking to former mascots, Bays says that they share a special bond that cuts across all 60 years.

“We all know what it’s about to bring smiles to fans and especially to the children.  We become representatives of not only the athletic department, but the school as well.  You’re not representing yourself, but you’re representing Clemson and the unique things that make the school so special.

When asked what it means to be the Tiger, Bays is quick to answer that it is a real honor.

“You are the face of Clemson University.  You represent the Clemson spirit of students, alumni and fans.  “To me it’s more than wearing a suit.  It’s the bringing of joy to people, especially children.  I have visited children in hospitals, appeared at Special Olympics and the smiles on little children’s faces is something you never forget. Being the Clemson Tiger is a special experience.  At the end of the day, we hope we added to the event and brought laughter and made people happy.”The Clemson Tiger makes around 500 appearances a year to a wide assortment of events in North Carolina, South Carolina, and Georgia.“The Tiger stays busy all year,” said Tori Palmer, Clemson’s Spirit Squad Coordinator and Head Cheerleading Coach.   “I think that the Tiger becomes the face of our university at events.  He is very recognizable and he spreads good will to the fans.  People get excited when they see the Tiger and they even have pictures made with him,” said Palmer.   These pictures sometime appear on Christmas, Valentine, and Birthday cards and this brings even more joy to more people throughout the year.“I think the Tiger is a goodwill ambassador,” said Bays. “I’m just honored, and so happy that I got to play the Tiger and hopefully brought happiness to people.  The Tiger mascot is so easily recognized not only at sporting events but other functions. To many, the Tiger is as much part of the game as the equipment and balls that are used for the various sporting events.“The Tiger mascot is a true embodiment of the Clemson Spirit,” said Barry Tomlinson, who was a reserve Tiger in the mid-1980s.  “It was a lot of fun playing the Tiger.   “You represent the school, and when people see you, it allows them to connect with Clemson even if you are a long way from campus,” said Tomlinson.  “To this day, I treasure the times I got to be the mascot. The happiness you brought people, especially the children, is something you never forget.”Homecoming at Clemson is a special time.The traditions surrounding homecoming, and the spirit in the air are simply unmatched by other schools. Homecoming at Clemson allows for reacquainting with others. It entails alumni functions, reunions, and most of all bringing the Clemson family together, back home. It’s very unique with the displays and floats built on Bowman Field and the extravaganza of Tigerama.  It all started back in 1922, when Clemson met Centre College in football. The homecoming day surrounding the football game was a day set aside to welcome back alumni to the campus for a special weekend.   Although many alumni move away after graduation, for many their thoughts and love for Clemson never leaves them.  There is a special place in their hearts for Clemson.It’s no wonder that homecoming is a special time and the alumni feel as though they have never left campus with the traditions that are carried on year after year.  The bond that Clemson creates between the school, the students and the surrounding area is definitely a magical one. TigeramaThe Friday night before Homecoming, an event that is a combination of a pep rally, fireworks display, and skit presentations comprise Tigerama. Tigerama began in 1956 and was the brain-child of the late Joe Sherman.  Sherman, a 1934 graduate of Clemson, started the Clemson News Bureau, the Clemson Communications Center, and the Sports Information Department.The first Tigerama was planned for the amphitheater in the middle of campus, but this never came off because of heavy rains that afternoon and night.  Instead, it was moved to the ballroom of the Clemson House, with 200 people in attendance.  Homecoming Displays and FloatsA few days before Football Homecoming, there are architectural wonders on Bowman Field. Each year the Clemson fraternities play one-upmanship with the construction of Homecoming floats and displays.  There is a central theme surrounding the Tigers and their opponent on Homecoming Saturdays, and the innovative displays and floats that take months of planning.  It’s unlike anything anywhere else in the country.It’s not known when the first displays were started, but before fraternities came to campus, Clemson cadets would make signs and small displays encouraging the Tigers to victory.   As Sherman wrote in a speech a few years back, “there is something in the hills that makes Clemson so special.” Homecoming had to be one of those elements that Sherman was thinking about.  It’s an event that makes Clemson truly unique.