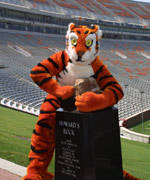 Since 1954, a Clemson student has adorned the mascot suit to entertain the Clemson faithful. Joined in 1993 by The Tiger Cub, these furry creatures can be seen imitating game officials (which is now against the rules), signing autographs, getting their picture taken with dignitaries (President Reagan, President Bush, Olympic athletes, among others), shooting the cannon, or doing “Pushups” each time Clemson scores.

Two of the fan favorite mascots were the all-time pushup leader (2,216) Mike Bays (’94-’97) who was third in the 1996 UCA National Mascot Championships and Chris Peters (’92-’93) who spent the 1995 football season as the mascot of the Memphis Mad Dogs of the World Football League. The “Eye of the Tiger” will always shine bright for the Clemson mascot due to an endowment set-up by Stuart McWhorter (’88-89) and his father Clayton in 1995.

Here are just a few of the great experiences by the Clemson mascots: One of McWhorter’s funniest moments was in Columbia in 1989 when he grabbed a tuba from a member of Tiger Band during halftime of the USC game. He ran on the field and created general havoc until being chased away by an offended Carolina band member.

Said Jay Williams, “It was an honor to be the first Tiger Cub.” “It was exciting create a personality and seeing the kids faces. The Tiger is more traditional, the fighting Tiger, but I am innocent, playful childlike mascot that the smaller kids really enjoy. The Cub adds a new dimension and means of interacting with the crowd.”

Schedule an Appearance by The Tiger or Tiger Cub

To request an appearance up to 90 minutes by The Tiger or Tiger Cub, please forward a letter or an e-mail to:

The letter must contain the following information; name of the event, date, time, location, directions, contact person and phone number.

The cost for an appearance is $70.00 and $.50 per mile to and from the location. You will receive in writing a confirmation on whether or not a mascot will be able to make the appearance.

The fur fabric is 80% acrylic and 20% polyester with a backing that is 75% polyester and 25% cotton. Heads are constructed from Kydex plastic.