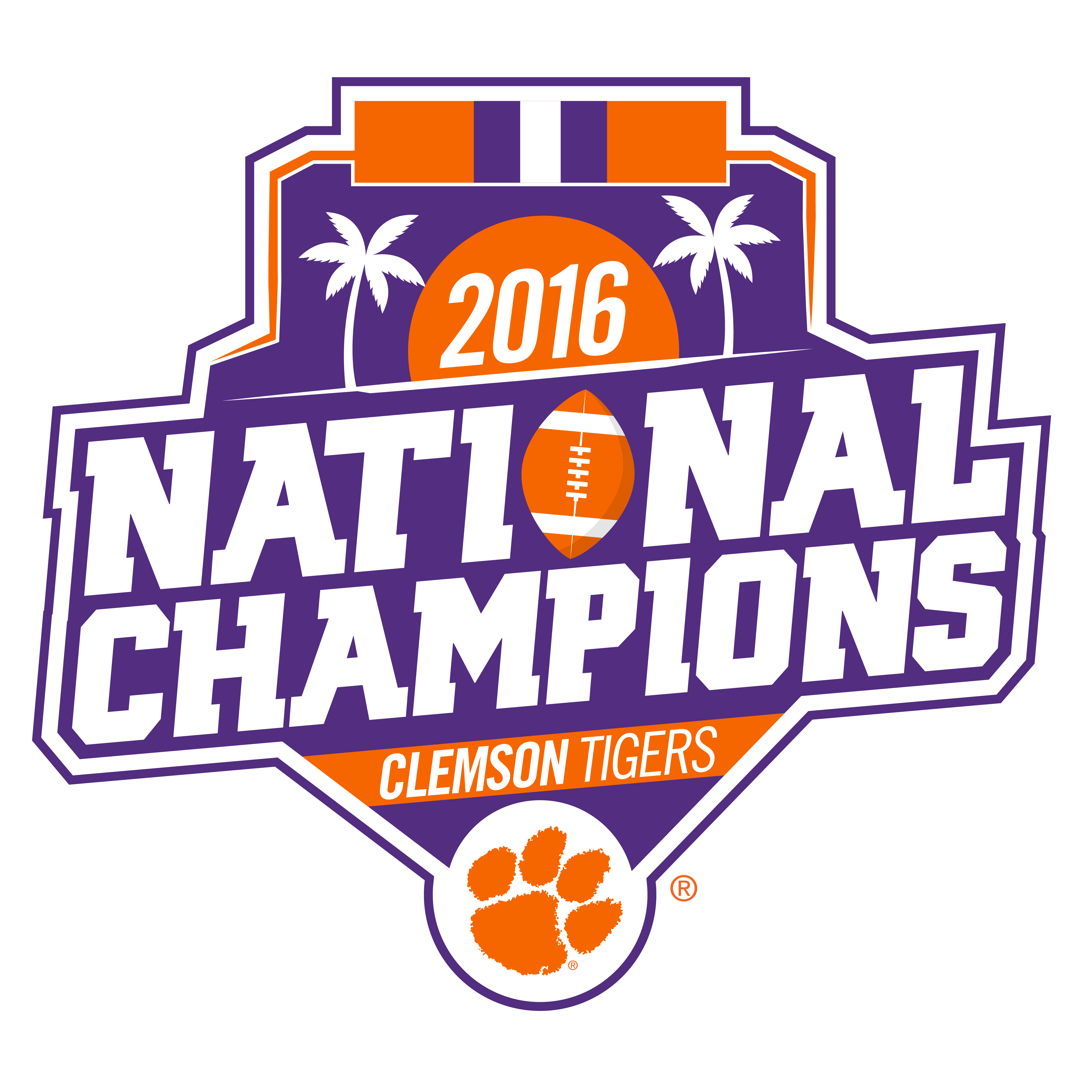 The Story Behind the Championship Logo

“It” is Clemson’s 2016 National Champions logo, a mark featured on more than 1,300 retail products since the Tigers won it all against Alabama on January 9 in Tampa.

And though you’ve seen it, what’s not immediately evident is the special meaning behind every element of the design, creating a look and feel that captures the indescribable “Clemson” quality that could only be made by a “Clemson man” himself: 2007 graduate and current Associate Director of Creative Media for Athletics Jeff Kallin.

“It was an incredible honor to be able to work on the logo,” Kallin said. “I can’t even describe the pride I felt as the clock ticked down in the game and I began to see it appear among the players and on the flags. It was surreal.”

Two months before that memorable night and just two weeks after another one—the night he and his wife, Jill, welcomed their first son, Mason—Kallin, 31, was asked if he was interested in designing the logo by Associate Athletic Director of External Affairs Tim Match, who oversees licensing for the athletic department. The Tigers had used a design from the Collegiate Licensing Company for the previous year’s National Championship but felt it may have missed that special “Clemson” touch. So when Clemson Football was on track for a return trip to the title game in the fall of 2016, Match started the process up again but looked internally for design this time.

“Clemson is a unique place and we wanted to have a unique championship mark,” Match said. “We pride ourselves on giving opportunities to our staff and students and we knew this was a chance of a lifetime that Jeff would be excited about, both as a Clemson graduate and someone who has dedicated the last 10 years to making us successful. It’s a great story to share that all of these items feature a logo created by a Clemson person.”

Kallin started the design process by evaluating previous football championship logos, then looking at examples from the NBA, NHL and other leagues. After the research phase, he opened Adobe Illustrator on his laptop and went about trying to pick shapes that would serve as the logo’s frame. He tried over 100 combinations but kept coming back to the idea of using the pedestal for Howard’s Rock as a shape.

He then tried over 20 text combinations, used color variations in different areas and eventually provided senior administrators with seven options from which to choose.

“What came out was dynamic but still with a distinct Clemson feel and elements that no other logo would replicate,” Kallin said.

Every element was created deliberately and with careful consideration:

Kallin works in Athletic Communications, a group whose work in social and digital media has been recognized by ESPN, FOX Sports, Sports Illustrated, Forbes, Sports Business Journal and several other outlets. Through that success, Kallin had the opportunity last spring to join Clemson IT’s Center of Excellence for Computing & Creativity, an organization driven to share best practices in different areas of expertise with faculty, staff and students across campus.

The visibility with the Center of Excellence then led to an opportunity to teach a course this spring in the Graphic Communications department, part of Clemson’s School of Business. Ironically, Kallin is an entirely self-taught graphic designer now teaching graphic design. And the 21 students in his class have had plenty to be impressed by, including the debut of the National Champions logo just two days before their first class.

“It’s been incredible to see it everywhere,” Kallin said. “The logo, like everything we create in Athletic Communications, is meant to tell a story.”

So, next time you’re showing off your National Championship memorabilia collection, now you can share the story, too.

Right after you recall where you were for Hunter Renfrow’s catch, of course.