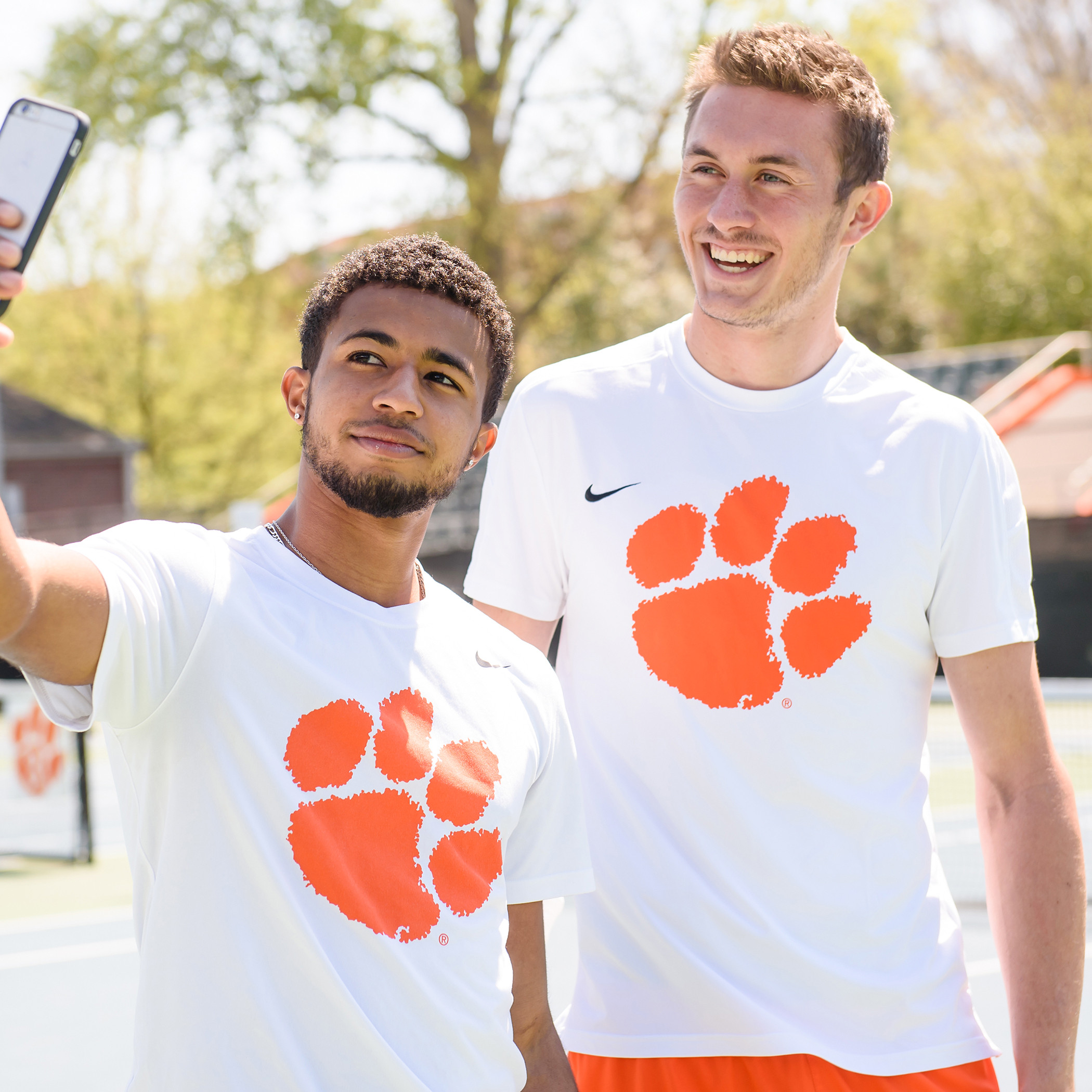 College is usually a place where one can make lifelong friends, and there is no better university at which to make a lifelong friend than Clemson. Though from the same country, French tennis players Alex Favrot and Daffra Sanon did not meet until they came to Clemson. They quickly became friends upon meeting, and their shared nationality played a larger part.

“He could speak French with me,” added Sanon. “I was very much a person he could speak to. It’s tough when you don’t say what you want.”

According to Favrot, becoming friends with Sanon helped make his transition to life in the United States easier.

“I could speak with ‘Daff.’ I could talk to him and ask him some advice and ask him for some help for school and stuff. Sometimes, I wanted to say something to the coach, but I wasn’t able to say it.”

Favrot noted that his first semester was the toughest.

“Language is tough at the beginning, like first semester…it was really tough for me. You can’t say what you want…you just listen. You miss home…a lot. Also, for me it was tough to do school and tennis. In class, I was lost because of English, and practice was kind of tough. First semester is tough, but then it’s fine.”

For Sanon, his first three months in the United States were the toughest.

“The first three months were tough with the language barrier. I wasn’t speaking English that well, so it was kind of tough. You don’t say what you want to say. Then you start missing home, because it’s the first time you leave home. At the end, I really like the mentality here and the way people handle themselves, so it was not too hard for me. Besides the language barrier, it was alright.”

Though it may have been tough for them at first, both Sanon and Favrot were able to settle in at a school that was calling their names. For Sanon, the tennis program at Clemson was what stood out to him.

“I heard the name before. It’s a really good tennis program, so that’s what stood out to me first. That was what mattered to me. That’s why I came here in the first place. And then the school itself…it’s in a good conference, the ACC, and has good academics, too…one of the best in the South. It was a good spot for me to come to.”

For Favrot, it was Clemson’s high-ranking business school that stood out, but the strong tennis program provided a strong draw as well.

“I heard Clemson was a top-20 business school, so I was interested by that. I knew it’s a pretty strong program in tennis. The ACC is the best conference in the country in tennis.”

Sanon’s college tennis career did not start at Clemson, however. It actually began at Washington, where he spent one year before transferring to Tigertown.

“I got injured, actually. I wasn’t happy with the way everything worked out there. I was playing well, then I got injured for a long time. But here, it’s definitely better. I don’t regret it.”

Favrot’s pre-Clemson experience placed him at the French Olympic Training Center, where he has spent the last four years training.

“That was a good experience. It prepared me for college because I was doing high school and playing professional or junior tournaments, so I was practicing four hours a day, and also I was doing school for four hours, so I was pretty busy. I was also able to travel in South America and Asia.”

Sanon and Favrot have made the most of their time at Clemson thus far. The duo has spent the entirety of this season holding the No. 1 and No. 2 spots on the Tiger team, with Favrot spending the most amount of time in the top position. He spent most of his freshman year at No. 1 as well, playing all but three matches as Clemson’s No. 1.

Even with all of this success, there are bound to be particular moments that stand out to a player. Sanon noted two particular experiences that were memorable to him.

“The first one was when we beat Texas Tech two years ago. They were top 15 and very good. And we went down 3-0, and it came down to my match in singles. I was able to win the third set, came back from 3-0 and then we beat them. So, we came back from 3-0 to 4-3. That was huge. And then I would say beating the No. 1 team in the country in doubles a couple of weeks ago was pretty big, too.”

Favrot recalled an experience from last year that stood out to him.

“For me, it was last year in Louisville. I was at three match points, and ‘Daff’ was at match point, too. It was tight, and at the end, we battled…we won this match. For me, it was good memories.”

All of this success has to come from somewhere, and this duo is a talented one. Sanon noted that the best facets of his game are his athleticism and forehand.

“It’s my athleticism, I would say. Being able to get on every ball, and then my forehand. It’s a big forehand, being able to be aggressive with it.”

The duo does not just perform well in singles, they are also quite talented in doubles. Sanon said that though they do not usually play doubles together, their communication helps. However, they do not have to play together to achieve success.

“We played a bit last year and played really well in the fall. It’s good communication, but we didn’t play that much doubles together.

“I think we could beat a good team, but for me, it doesn’t matter really who I’m with. I just go out there and give it my best.”

“Last year, we had the same game in doubles, so it wasn’t working very much. We are French and can communicate, but we improved this year in doubles. I think we can be like good teams.”

The future looks bright for these talented Tigers. After college, Sanon would like to try to find a job somewhere, perhaps on the West Coast and in the finance field. Favrot stated that he might try to become a professional tennis player, but it would depend on how the rest of his college career played out.

One thing is certain for these Tigers…they have made a lifelong bond. Sanon and Favrot truly exemplify what the Clemson Family is all about. From France to Clemson, there are few bonds stronger than that of the Clemson Family.