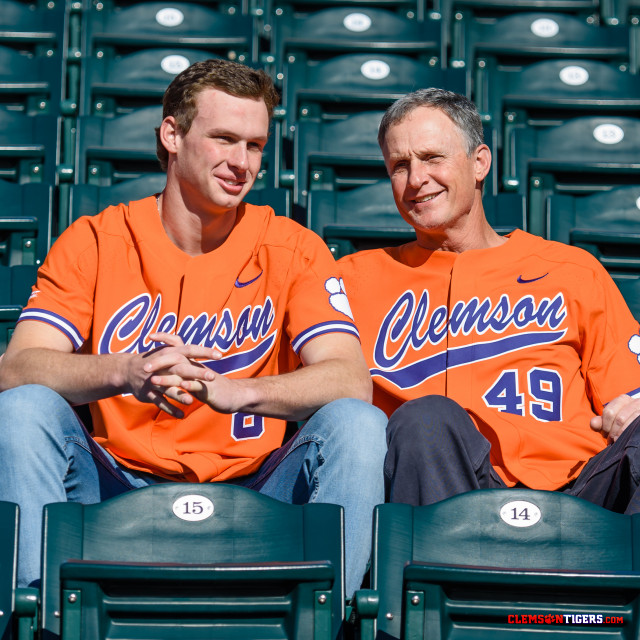 Shortstop Logan Davidson led off with a single in the first inning of the Tigers’ first game against No. 10 Dallas Baptist in late February. As he stood at first base removing his ankle guard and handing it to first-base coach Ben Paulsen, another Clemson coach slowly made his way down the dugout to stand parallel with the bag and watch Davidson on the basepath.

He did not say anything as Davidson, a known threat to steal, took his lead at first base, or when the Patriot pitcher, who obviously knew about his speed, tried to pick him off a handful of times before finally pitching to Seth Beer. And when Beer grounded into a double play, the coach made his way back down to his normal position in the coaches’ end of the dugout before Davidson made it off the infield dirt.

Of course, that coach had the same last name, Davidson, on the back of his jersey, because it was Logan’s father, Mark.

Prior to the 1981 season, head coach Bill Wilhelm reached out to the elder Davidson and offered him the chance to transfer from Charlotte and play at Clemson, and for Mark, it was an easy decision.

“Clemson was certainly one of the greatest universities in the Southeast with a particularly great baseball program,” he reminisced. “Coach Wilhelm was a legendary coach, and I couldn’t pass up the opportunity. I came down and redshirted in 1981 but then went on to win a starting position in the outfield in 1982, and I had a good year.”

The elder Davidson was being modest. He was a standout in his one active season as a Tiger, hitting .336 with eight homers, 50 RBIs, 58 runs and 18 steals in 18 attempts in 1982. The outfielder was then selected in the 11th round of the MLB draft later that year by the Minnesota Twins, and he ultimately went on to play 413 games over six seasons in the majors as a member of both the Twins and the Houston Astros. In 1987, he earned a World Series championship ring with the Twins.

When Logan was growing up, the Davidsons had a batting cage on their family farm, and it was there that he learned how to hit and fall in love with the game through which his father had made a name for himself.

But it was always on Logan to say he wanted to go hit. Mark never pushed him on anything regarding baseball, and that is exactly how both wanted it to be.

“As far as getting into baseball, it was just natural,” said Logan. “Growing up as a guy with a dad who played in the big leagues, you like the game. But it was always fun. He never put any pressure on me to play the game. He always had it where I would have to ask him to go out to the cages, and that’s how he wanted it to be. That was the best way to do it, because I didn’t get tired or bored with the game. I had to be self-motivated to go hit.”

Similarly, when the time came for him to choose a college, Logan said there was no verbal persuasion from Mark for him to choose Clemson. The campus and coaching staff spoke for themselves, he said, and it did not take much convincing for him to become a Tiger.

And it did not take long for him to make a splash on the field. Like father, like son.

Thirty-five years after his father, the younger Davidson had a season reminiscent of Mark’s during his freshman year as the Tigers’ starting shortstop. He was quite the familiar face in the middle infield. Aside from Beer, he was the only player to start all 63 games in 2017. He hit .286 with 41 RBIs, 56 runs, 10 stolen bases and 12 home runs, earning him a spot in the 2017 College Home Run Derby at TD Ameritrade Park in Omaha, Neb., in July. He was also a first-team freshman All-American and was named to the All-ACC Freshman team.

Mark, watching from the stands, seemed to have it all. He had completed a successful professional baseball career, and now not only had a son who was mirroring his passion for the game, but also a daughter who was getting ready to graduate after an ITA All-America singles and doubles career in tennis at Stanford.

But Mark did not have his degree from Clemson, and when head coach Monte Lee gave him an opportunity to come back and finish it while also being a student assistant coach, it was yet another easy decision.

“It was out of the blue, and we got a call from coach Lee giving me an opportunity to come back and get back out on the baseball field,” remembered Mark. “Of course, any father would want to see his son play for a couple of years. It was an easy decision, and we’re thrilled to be back. We love the area and we love Clemson University. I’m extremely happy that Logan is here.

“It’s been an absolute honor to come back and finish my degree and be around so many great kids. It’s been a lot of fun so far.”

Logan echoed Mark’s enthusiasm about having the person who taught him to play the game in the dugout game in and game out.

“It’s been really good to have him here,” explained Logan. “He taught me how to hit and how to play the game, so having him here by my side and keeping me on track has been great for me. We have a very professional relationship at the field and are able to keep it on professional terms, and that’s because he played the game for so long. He understands the ins and outs and how hard the game is, and he can relate that to me. It’s not your typical parent-son relationship in baseball.

“I think that, a lot of times, people picture a father and son playing baseball, and the father getting on the son a lot. But for me, I might strike out where I swing three times, and I’ll come up to him and his response will be ‘way to get your hacks in…you had good swings at them…now get them next time.’ It’s a better relationship, and I think it’s the right way to handle it.”

Mark credited his extended time in baseball for dictating how he approached, and still approaches, teaching Logan the nuances of the game.

“Fortunately, I was able to play,” said Mark. “It’s an extremely hard game, and I’ve seen so many other parent-child relationships where it goes bad because the parent is pushing a little too hard. The first thing you have to do is let the kid fall in love with the game. When he wanted to go hit, we’d go to the cage and hit and get some ground balls in, and it became a routine. And the better you get at something, the more you want to do it. And the more you want to do it, the better you get at it. Logan has really become a good ballplayer.

“He’s definitely better than I was at his age, that’s for sure,” added Mark with a smile.

The two have spent so much time together on or around the baseball field that it is hard for either one to come up with a specific time that they believe epitomizes their relationship, but they both agree they would not trade that bonding time for anything.

And they both agree that they are excited for what this season has to bring, not just for their relationship, but also for the team as a whole.

“I’m excited to see how far we’re going to go,” stated Logan. “This team…we trust each other, and you could see that in our walkoff win on opening day. We were down, but we all had that feeling within the team that we weren’t out of it. It’s important to have that feeling, and you can’t manufacture that. That’s going to take us a long way.”

Mark is confident about the basis of the team and what they have given the coaching staff to work with.

“This team has a wonderful nucleus,” added Mark. “When you take that and add in the coaching staff that’s here now with coach Lee leading the way, there’s a lot of hard work being put in, and from my experience, which is quite a bit now, I would be very surprised if we can’t mold this talent into a pretty good ballclub.

It is a mentality that has obviously worked for both Mark and Logan, and together, they hope that bringing that Davidson dynamic to the dugout will continue to have a positive impact.