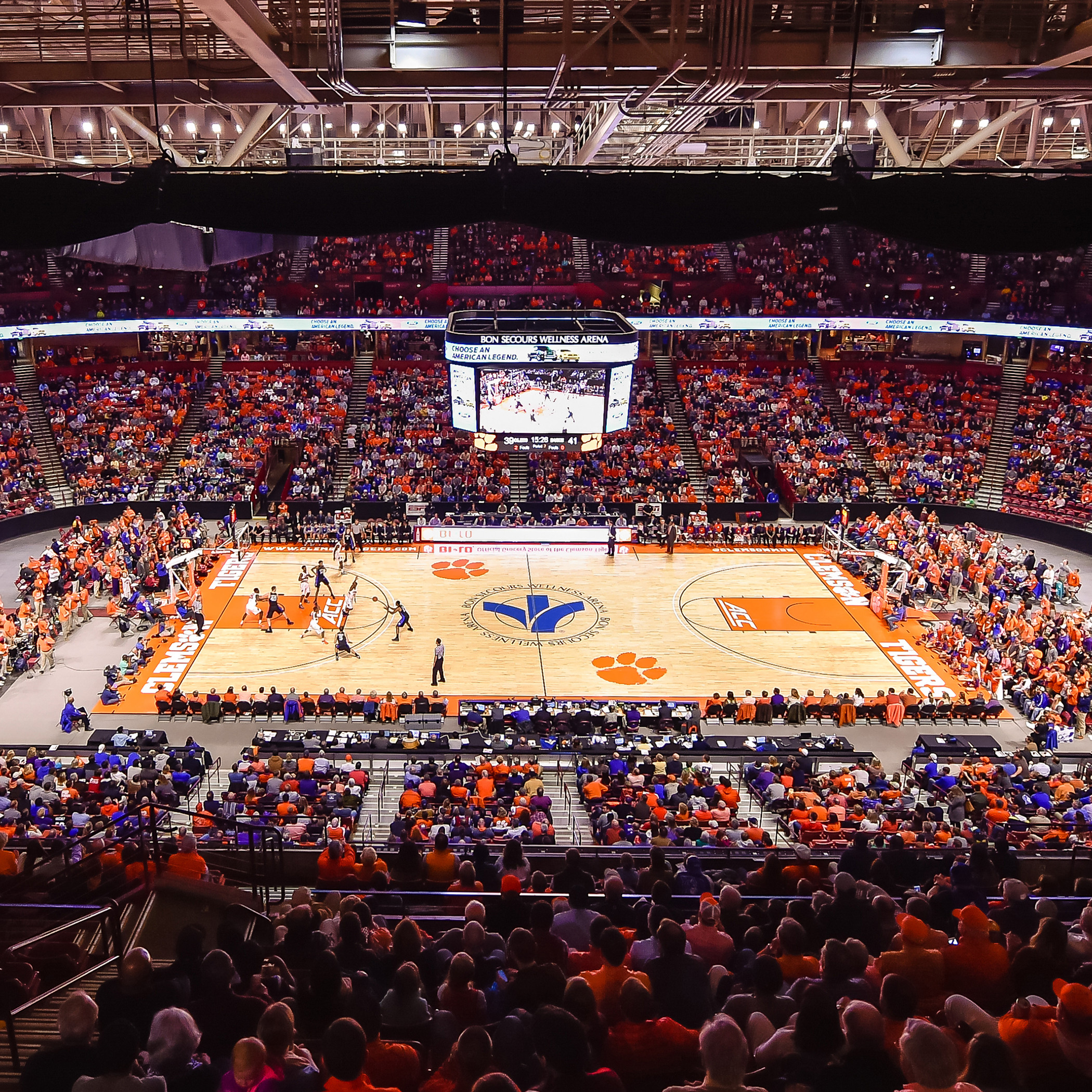 Editor’s note – The men’s basketball team played 17 regular-season games and an exhibition contest in Bon Secours Wellness Arena in Greenville, S.C. Prior to the season, the team held a couple of “Open House” events and also surprised the Main Street market on a fall Saturday. The Tigers’ leading scorer, Jaron Blossomgame, shared his thoughts on the overall Greenville experience and more.

It was really fun to see all the people come out to those preseason events in town. We felt that they took us in as their sports team. Even people who weren’t Clemson fans would take a step back and say, “What’s going on here? What is Clemson basketball all about?” It was something new and fun that was going on.

I think the Main Street flash-mob event really brought the fact that the season was near to everyone’s mind. It was a lot of fun handing out schedules and taking pictures and signing autographs for the kids. People seemed genuinely excited to see us, and it was a good, heart-warming experience.

Coming into that Saturday, we didn’t know how it would be received. We really didn’t know what to expect. I was really impressed with the people crowded around. They were excited to see us dunking on the portable goal. It was really big of us to engage the crowd in different games. But they were also able to see us face to face and have conversations with us. It really makes a big difference when the fans do come out and see us. They remembered us from the Main Street event.

The first time we saw the gym, it didn’t have the orange outline of our court like we had in Littlejohn Coliseum. It was a little different. I thought to myself, “It’d be great if we could get some orange in here to make it a home court experience.”

Well, the next time we came, the court had been painted and banners had been put out around the arena with different players on them. Seeing my teammates and coach (Brownell) up on the different banners made it feel like home.

The gameday experience was an adjustment. Let’s say we had a home game on Tuesday. We’d leave campus around 11 a.m., from Lightsey Bridge apartments and bus to the arena. We’d shoot around on the court for about 45 minutes to an hour, and then head to a hotel from there.

We’d stay at a hotel for about four hours, where guys would sleep, hang out or just get ready for the game. If it was a 7:00 game, we were on the bus at 5:20 ready to head back to the arena.

It was pretty cool to get a police escort to the arena, and all the people are looking at our Clemson bus. It’s a good experience to pull up and see the “Gameday” sign showing on the flasher (digital board) out in front of the arena.

I think we became used to that gameday experience, and how different it was than when we were playing in Littlejohn. It’s what we had to do, so we weren’t going to make any excuses or feel sorry for ourselves.

It was a really good January for us. It started with Florida State, and we were able to beat them at home. Then we went on the road and got a big win at Syracuse, and I think that got some people’s attention. It made people think that maybe they should come out and see us play.

I remember that we played Louisville early on a Sunday, and we had a decent crowd and support despite the early start. It was a big win for us, our third ACC win in a row.

So with Duke coming in next, there was a lot of positive buzz about us around the community. The crowd was there for the Duke game in warmups. You could see the students running down the aisles trying to get courtside seats an hour before the game. It was full before the game. And having an environment like that for games really excites you. It brings out more juice in some guys.

We definitely fed off the energy from the crowd. The Duke game was back and forth. We got down early, but I remember hitting a three that broke the tie, and the crowd went crazy. After that, our guys were confident. We were focused on getting stops and making plays. We were pumping the crowd up. It was a fun environment to play in.

Having Miami (Fla.) come in next, and with the opportunity for a fifth straight ACC win, the fans really came out and packed the arena. It was the one game this season where I believe the fans really put us over the top.

It was back and forth and we were down a little bit, but we went on a crazy run over the last few minutes and ended up winning by double digits. It was our third top-25 win in a row. Everyone came out to see us, and it was really fun seeing the fans embracing Clemson basketball.

This year was good for us because we weren’t given everything. Some places, the idea or popular opinion is that athletes are given everything. We had a small locker room space, we shared a film room, we shared practice space in Jervey Gym with women’s basketball and volleyball.

The process of driving to Greenville for games and not having a normal experience made us appreciate the little things more and more. I think our staff at Clemson and our coaches did a really good job of keeping us comfortable and locked in and focused on trying to win games.

Overall, I’d say the experience in Greenville went really well…a lot better than we expected. I think we attracted a lot of new basketball fans. With us playing in Greenville, it became something to do. The people who came to games like Miami followed us all year. And hopefully, they’ll come from Greenville to our new gym and see our team next season.