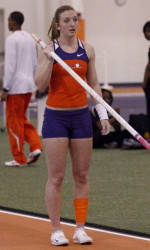 CLEMSON, SC – Lauren Terstappen established a school record in the pole vault to lead the Tiger track & field program on the final day of the Clemson Invitational. She broke her own record with a clearance of 13’2.5″ to take home the individual victory. She led a sweep of the top three spots in the event.

The pole vault had a distinct Clemson favor on Saturday, with Terstappen’s victory the obvious highlight. Caroline Bond, a freshman from Georgia, made her debut with a 12’4.5″ clearance to tie for second place alongside sophomore Christy Gasparino.

The Tigers took home four event titles on Saturday, including Brittney Waller in the 20-pound weight throw. She earned a sweep of the throwing events over the weekend, also winning the shot put Friday afternoon. Waller hit a season-best mark of 64’0.25″. The Tigers also won the men’s weight throw, as junior transfer Marcus Brown took home the top podium honors with a mark of 52’4.5″.

Ty McCormack won the men’s mile Saturday. He posted a time of 4:10.65 and easily took home the victory over three teammates from Clemson. Martin Maloney and Chris Slate actually tied for second place with a time of 4:17.79, just a nose ahead of freshman James Dwyer who came in at 4:17.99. Lisa Girard was the team’s top finisher in the women’s mile (5:03.30).

Also in the distance events, Kate Borowicz was third place in the women’s 3000-meter run. The Upstate native produced a time of 10:28.23.

The Tigers return to action for one of their biggest meets of the 2012 indoor season, the New Balance Invitational in New York, NY.