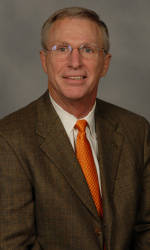 CLEMSON, SC – Clemson Athletic Director Terry Don Phillips will be inducted into the University of Arkansas Sports Hall of Honor on September 3, 2010. A three-year letter winner for the Razorback football team (1966, 68-69), Phillips helped the Hogs compile a 25-7 record and two trips to the Sugar Bowl. He was a starting defensive tackle for the Hogs playing alongside his brother and Outland Trophy winner Loyd Phillips.

Following his playing career, Phillips began his coaching career as a graduate assistant at Arkansas in 1970-71 before moving on to Virginia Tech where he spent seven seasons. His more than 30-year career in collegiate administration began in 1979 and has included administrative stints at Florida and Missouri before assuming athletic director roles at Liberty, Louisiana-Lafayette, Oklahoma State and Clemson.

A former player and coach at Arkansas, Phillips also served as President of the Razorbacks Foundation, Inc., for three years from 1988-91. Phillips has an undergraduate degree from Arkansas (1970) and a law degree from the Arkansas School of Law (1996).

Phillips is in his eighth year as athletic director at Clemson. This year the Clemson program has had seven teams ranked in the top 25 of their respective polls. Clemson was one of just eight schools at the Division I level to play in a bowl game, the NCAA men’s basketball tournament and the NCAA Baseball Tournament this year. Clemson is one of just four schools to do that each of the last two years.