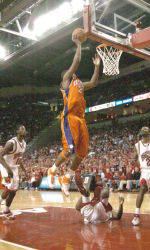 COLLEGE PARK, Md. (AP) -Ekene Ibekwe couldn’t do anything right in a miserable loss to Miami on Wednesday. To redeem himself Saturday, the Maryland forward helped knock off the last unbeaten team in Division I.

“We knew what was at stake. This game was the biggest of the year for us,” said Ibekwe, who posted his fourth double-double of the season. “Clemson is a pretty good team, and we just wanted to come out and give them their first loss, especially at home.”

D.J. Strawberry added 14 points, James Gist had 12, and Mike Jones and Greivis Vasquez each scored 10 for the Terrapins (15-3, 1-2 Atlantic Coast Conference). Maryland shot 63 percent for the game and made 25 of 31 free throws.

Not bad, three days after shooting 22 percent as a team in a 63-58 loss to the Hurricanes. Ibekwe had 10 points on 1-of-5 shooting in that game.

“After the Miami game, we talked about staying together as a team,” Maryland coach Gary Williams said. “Through all of the criticism said after that game I knew we were better than that … We worked hard the last two days and tried to be a very confident team on the court today.”

Clemson had held opponents to an average of 61 points a game.

The last time the Tigers started 17-0 was the 1986-87 season. Clemson coach Oliver Purnell said he thought his team handled the unbeaten streak well, but that it faced a tall task against Maryland.

“I think it’s a situation where we didn’t play real well,” said Purnell, who was an assistant at Maryland in the pre-Williams era. “We had a fired-up Maryland team on their home court in the ACC on a Saturday afternoon. That’s a tough deal.”

Maryland outrebounded the Tigers 35-29 and held them without a single fast-break basket.

“As far as we’re concerned, the stats tell the story,” Purnell said. “Defensively, We just weren’t very good. I give Maryland credit for knocking down the shots, but we gave them to many lay-ups and really didn’t guard them on the half court.”

Clemson never got closer than five in the second half with Maryland leading by as much as 11 with 2:53 remaining.

“Losing is not a great feeling,” said Clemson forward Trevor Booker, who had 14 points. “Some people might think we are overrated now. We didn’t play well on defense and struggled a lot. That’s what killed us.”