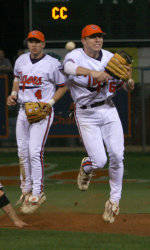 Tenth-ranked Clemson scored nine runs in the first two innings and held on to defeat #12 N.C. State 9-5 in front of 3,951 fans on a cold Friday night at Doug Kingsmore Stadium. The Tigers picked up their first conference win of the season and improved to 14-6 overall, 1-3 in the ACC. The Wolfpack dropped to 21-6, and 5-2 in conference play.

Josh Cribb (5-0) pitched 5.1 innings, allowing three runs on six hits, and striking out eight to earn the win for Clemson. Steve Richard struck out the only batter he faced to pick up his fourth save of the season. Eryk McConnell (4-3) gave up seven runs on nine hits in 1.1 innings pitched to take the loss for the Wolfpack.

Clemson opened the scoring with a five-run first inning. Demmink singled to center to lead off the inning, and moved to third after back-to-back bunt singles by Brad Chalk and Harbin, respectively. With one out, D’Alessio hit his third home run in as many games, this time a grand slam to center, the third slam of his career. The blast gave D’Alessio 10 RBIs in the last three games, and it was his fifth homer of the season. Marquez Smith followed with a single to right, and Widmann singled to center. D.J. Mitchell then singled through the left side to score Smith and move Widmann to third. Widmann attempted to score Clemson’s sixth run of the inning after a passed ball, but was thrown at the plate.

The Tigers added four more runs in the second. Demmink doubled off the fence in left to begin the inning, and scored one-out later on a single by Harbin. Tyler Colvin followed with a double to center that scored Harbin. Smith walked with two outs, and then Widmann doubled to left-center as center-fielder Camp made a diving attempt to catch the ball, but was unable to hold on. Colvin and Smith scored on the play.

The Wolfpack got on the board in the fifth. Jonathan Diaz singled up the middle to lead off the inning, and moved to third on a double by Camp. An RBI groundout by Aaron Cone scored Diaz, and a sacrifice fly by Aaron Bates scored Camp.

Mangini singled through the left side to lead off the sixth, and Cribb struck out Corona in what was his last batter faced of the game. The Tigers brought in Sean Clark, and he walked Jon Still. A wild pitch advanced Mangini to third and Still to second. Diaz struck out swinging, but back-to-back-to-back singles by Camp, Cone, and Bates cut the Clemson lead to 9-5.

Alex Martin continued his good work out of the bullpen, pitching 3.0 scoreless innings, and did not allow a hit.

Tiger pitchers struck out 13 Wolfpack batters. N.C. State’s previous high in strikeouts in one game was 12.