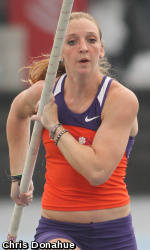 To be eligible for All-Academic consideration, individuals had to have at least a 3.25 cumulative GPA and met either of the following athletic standards: for the indoor season, a student-athlete must have finished the regular season ranked in the national top 96 in an individual event or ranked in the national top 48 (collective listing) in a relay event on the official NCAA POP list provided by TFRRS.org; for the outdoor season, a student-athlete must have participated in any round of the NCAA Division I Championships (including preliminary rounds).

Five women’s athletes earned the All-Academic award for the second straight season – Stephanie Buffo, Alyssa Kulik, Patricia Mamona, Kim Ruck and Liane Weber. Mamona was the NCAA’s outdoor champion in the triple jump for the second consecutive year, while Weber was runner-up at the national outdoor meet in the heptathlon. Kulik finished fourth at the NCAA Outdoor Championships in the steeplechase. Ruck was the ACC’s 10K champion this spring.

Three freshmen were named to the All-Academic Team for the first time in their careers: Whitney Fountain, an All-ACC performer in the pentathlon; Christy Gasparino, and ACC outdoor pole vault runner-up Lauren Terstappen.

On the men’s side, freshmen Michael Kopanski and Ty McCormack were named to the team. Kopanski had a solid freshman season, scoring at the ACC level in the pole vault both indoor and outdoor. McCormack red-shirted the indoor season, but advanced to the NCAA East Preliminary Round in the 3000 steeplechase outdoors.