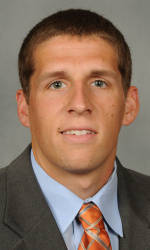 “I want to thank Adam for the time and effort he’s put into the men’s basketball program over the past few years,” Brownell said. “I’m happy to see him take this next step in his professional career. I know he will do an excellent job for Coach (B.J.) Hill at Northern Colorado.”

Butters was a student manager for the Tiger basketball team each of the past four seasons. Clemson advanced to the NCAA Tournament during each of his years with the program and won a first-round game over UAB in March. Clemson and Duke are the only schools in the ACC to advance to each of the last four NCAA Tournaments. During his four-year stretch as a team manager, Clemson compiled a 90-42 overall record. Butters was the recipient of the 2011 Andy Balliet “Spirit of Clemson” Award, given annually to a support staff member who goes above and beyond the call of duty for the men’s basketball program.

“I’m really happy Tee has decided to continue working with the program,” Brownell said. “He is a very loyal, hard-working young man and our players have a great deal of respect for him. I know he’s excited to get his coaching career started at his alma mater.”

Butters is the grandson of Duke Athletic Hall of Fame member Tom Butters, who was a pitcher in Major League Baseball for the Pittsburgh Pirates from 1962-65 and went on to serve as athletic director for the Blue Devils from 1977-98.

The Durham, NC native earned his undergraduate degree in business management at the May commencement ceremonies. The son of Bret and Nancy Butters, he is enrolled in the youth development leadership master’s degree program.