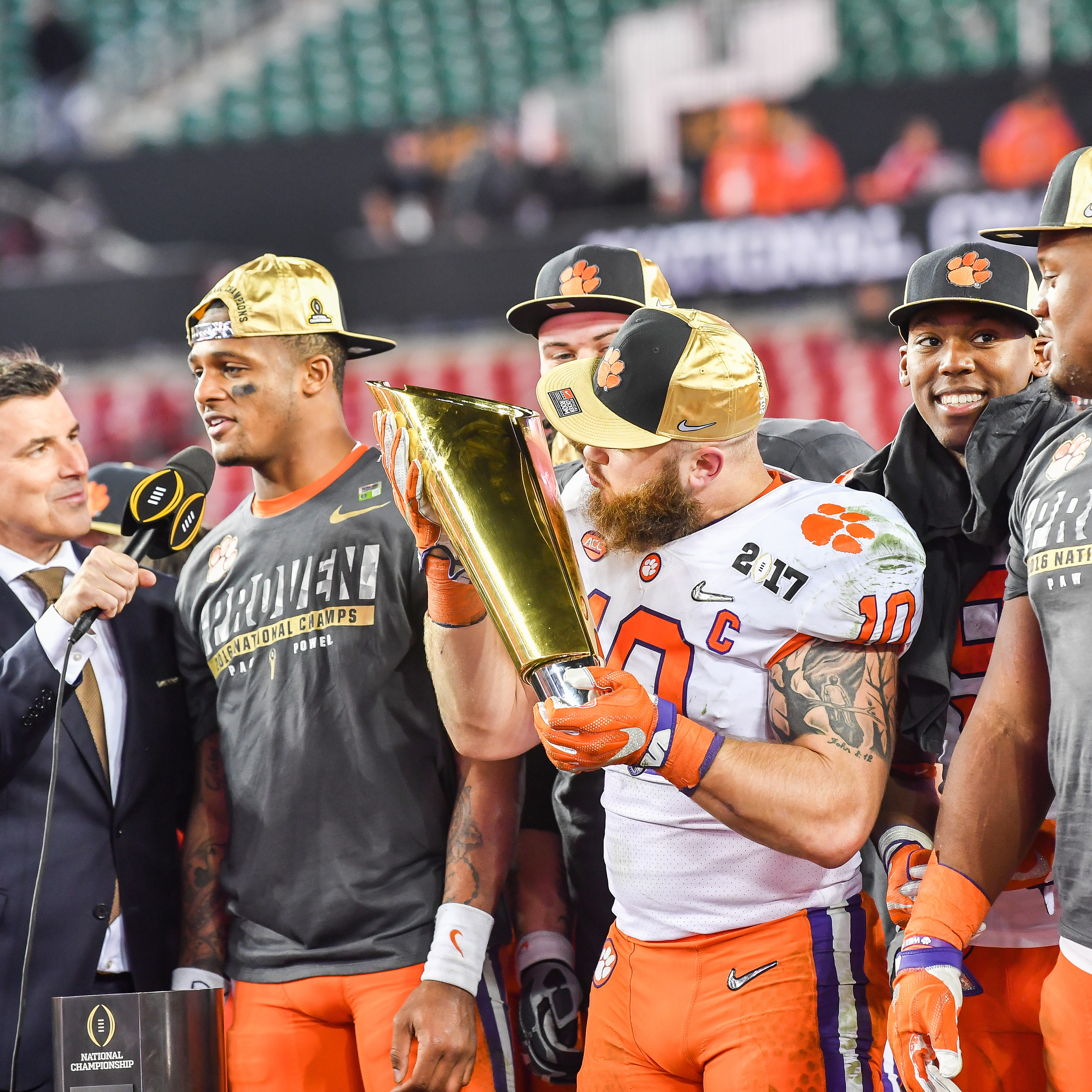 When I finally found the time to go through my text messages and catch up on social media in the early-morning hours following Clemson’s 35-31 victory over Alabama, I came across a consistent theme. Family members, friends and colleagues — men and women both — were brought to tears as the Tigers were crowned National Champions of college football for a second time.

I hadn’t reacted emotionally to what I had just witnessed hours before in the Raymond James Stadium press box.

Lord knows there were plenty of opportunities. I sat next to the man who hired me in 2004, Tim Bourret, as our team took a 28-24 lead with 4:38 remaining in the game. He has been at Clemson since 1978, but he missed the program’s first national championship game due to a basketball trip. Maybe it was because Tim left to go down to the field immediately following Wayne Gallman’s touchdown, and I didn’t get to see his reaction.

After the game ended, the press box piped in the public address system and I overheard Coach Swinney’s interview with Rece Davis on the award stage. I heard linebacker Ben Boulware thank those that came before him, and Deshaun Watson give the glory to God.

Maybe I was too busy typing postgame notes, of which there were more than I could comprehend. Working away from my seat as the field cleared, I knew I wanted to soak up some of the postgame celebration, so I made a decision to only do quick notes, packed up my laptop and headed down to the locker room. The visitor’s locker room was so small and room so narrow that I stood literally with my back to the double doors that held the throng of media back.

Once Swinney finished his speech and exited the room, I congratulated some of the coaches, players and staff I know well. Longtime video man Henry Guess couldn’t wipe his trademark grin off his face, and who could blame him? I got a huge hug from Gallman and a fitting ‘I love you’ from Jay Guillermo. Still nothing.

The buses finally returned to the team hotel about 2:45 a.m., where staff and families awaited. Inside the lobby, hundreds of Clemson fans packed the hotel to get a glimpse of the Tigers. And yet, still nothing. Not even after making it back to my hotel and laying down watching ESPN’s highlights.

I was beginning to think something was wrong with me.

As we drove back to Clemson the next day, my wife Jocelyn pulled up WYFF’s Facebook Live as the news channel’s helicopter followed the team buses onto campus. We could tell fans were packing the roadsides, just to cheer on the Tigers. As the lead bus pulled onto Centennial Boulevard and up to the WestZone, one of WYFF’s anchors said something to the effect of “The entire country is focused on Clemson University today.”

Finally, the tears had come.

Maybe it’s because I own two degrees from Clemson, or maybe it’s because I’ve worked in the athletic department for 12 wonderful years, but for some reason, her remark hit me like a ton of bricks and my eyes filled with water.

Winning the National Championship in any sport is incredibly difficult to do, but it brings great pride to your university and your community. Especially when that community is as tight-knit as Clemson, where literally everything and everyone bleeds orange.

I’ve had the good fortune to work closer with the football program these past couple of years, and we made it to the National Championship Game both times. By a stroke of unbelievable luck, I was able to attend the Heisman Trophy ceremony in New York City. It was an unforgettable experience … but nothing like we witnessed Monday and into Tuesday in Tampa.

I carried an incredible amount of optimism this entire season, just ask anybody. I knew the offense was going to get going after a lackluster first half against Alabama. I could see the disappointment in Deshaun Watson’s eyes after the Heisman Trophy ceremony, but I knew he had his eyes on a bigger prize. He will forever be immortalized in Clemson lore after his brilliant fourth-quarter performance against the mighty Crimson Tide.

But this team was far from a one-man show. On offense, Gallman is as tough and durable a back as I can remember to come through the program. Mike Williams showed time and again why he’s so highly coveted as a pro prospect, making leaping catches with such ease and regularity. Deon Cain, a guy who grew up tremendously as a sophomore and was a feared deep threat. Artavis Scott, whose selflessness extended to covering punts and kicks this season. Hunter Renfrow, the walk-on turned hero after hauling in what can only be described as “The Catch III” — the game-winner with one second left that beat ‘Bama. Tight end Jordan Leggett, who came through in the clutch time and again this season. Who will forget the image of him snatching that ball from Watson that put the Tigers at first-and-goal?

The sometimes-maligned offensive line that held its own against a talented Alabama front. Guillermo was as fine a spokesman as we had to work with on this team, and I won’t forget him for that anytime soon. We started a freshman right tackle in Sean Pollard, and truth be told, he held up pretty well in the end.

Defensively, they don’t come any better than Brent Venables. All that talent that left for the NFL? No problem, they just reloaded and were even better in 2016. Hard to fathom coming into the year, but it proved to be true.

Clemson’s front four was the team’s strongest unit in my eyes. So much talent across the board. Start with the senior Carlos Watkins, who set a record for sacks by a defensive tackle. Christian Wilkins, with the incredible versatility on the field but teddy bear mentality off it, was sensational. Then you’ve got two freshman studs in Clelin Ferrell and Dexter Lawrence. The future is bright, as only Watkins moves on.

Ben Boulware had a similar impact in my view that Eric Mac Lain had offensively for the 2015 national runner-up. His leadership was incredible. Guys listened when he spoke up, and he was the alpha dog on that side of the ball. A guy who played like his hair was on fire, he drew a ton of criticism this season. But he didn’t bat an eye, he played his best when the lights grew brighter. He truly loved Clemson, if you couldn’t tell from his passionate postgame speech. He deserves a ton of credit. But he had help at linebacker, guys like Kendall Joseph and Dorian O’Daniel who stepped into starting roles and thrived at times this season.

The story of the defense, to me, was the secondary. Aside from established cornerback Cordrea Tankersley, this unit entered the 2016 season with a ton of unknowns. But boy, did they ever answer the bell? Jadar Johnson was the MVP of this group, as he really solidified things from the safety position. He was so consistent and rarely out of position. Plus, he really played and spoke with an attitude that I believe became contagious within his unit. I’ll never forget his reaction when I texted him the news he was named First-Team All-ACC. He wrote back, “You just made me so happy.” That put a huge smile on my face, because you can’t help but pull for a guy who is a backup for three years and finally gets his turn to have a big impact.

The season will be ultimately defined by the way the Tigers played in clutch moments. Jadar batting down a couple of passes in the endzone to seal a win at Auburn, a team that went on to a good season. Marcus Edmond, coming out of seemingly nowhere with the key defensive stops against Louisville and NC State. Watson’s fourth-quarter brilliance against Louisville and Florida State. Leggett’s catch, run and pylon dive at Doak Campbell. Tootie stepping in front of a fourth-down pass to intercept Jerod Evans and seal the ACC Championship. And a host of guys who made plays Monday in crunch time against the dynasty that is Alabama.

I’m starting to get misty-eyed just thinking about it all again.