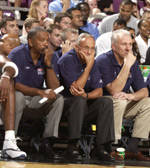 Team USA Set To Begin Qualifying Round Play In 2004 Olympics

The USA men’s basketball team will begin its quest for Olympic gold on Aug. 15, with Clemson Head Coach Oliver Purnell on the sidelines as an assistant coach under Larry Brown. Team USA will face Puerto Rico in its first game of the group B qualifying round. This is the seventh time in Purnell’s career that he has been selected as a coach of a USA Basketball team. Of the six teams Purnell has coached since 1994, five have earned gold medals in international play, while the other team earned silver. Overall, USA Basketball teams have produced a 44-2 record when Purnell has been on the coaching staff.

Team USA completed exhibition play leading up to the Olympics on Aug. 10, when the USA defeated Turkey in Istanbul by a score of 80-68. The Americans began their exhibition slate with a 96-71 victory over Puerto Rico in Jacksonville, FL on July 31. The team traveled to Cologne, Germany, where Italy defeated USA by a score of 95-78 on Aug. 3. Team USA rebounded to resume its winning ways with an 80-77 victory over Germany in Cologne on Aug. 4. On Aug. 6, the USA basketball team picked up its third win in exhibition play with a 78-60 win over Serbia in Belgrade. Team USA downed Turkey in Istanbul by a score of 79-67 on Aug. 8.