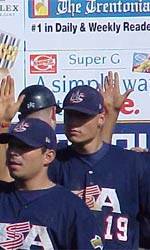 TRENTON, NJ – Team USA righthander Bobby Brownlie (RHP, So, Rutgers) threw a 7-inning, complete game in a 3-1 victory over Taiwan in front of his hometown crowd, Friday in the nightcap of a doubleheader at Waterfront Park. It was the final game of the summer for the 2001 USA Baseball National Team, as they finish with an overall mark of 21-7-1.

Taiwan’s Yang Yueh Tseng singled home the game-winning run in the bottom of the seventh inning to give the Chinese Taipei National Team a 7-6 victory over Team USA in the opener of the doubleheader.

In the opener, Jeff Baker (IF, So, Clemson) drilled a two-run homer in the top of the first off Taiwanese starter Chang Wei Tu, to get the Americans on the scoreboard. But Taiwan rallied to tie the score 2-2 in the second off Team USA starter Kiki Bengochea (RHP, So, Miami), when both Chien Ming Chang and Chia Hong Chen ripped run-producing doubles.

But disaster struck for Team USA in the bottom of the third, when Chinese Taipei scored four unearned runs without the benefit of a hit to take a 6-2 lead. Three walks by Bengochea did not help matters, but two errors by Baker, and a dropped fly ball by Rickie Weeks (OF, Fr, Southern) – with the bases loaded that scored three runs – did the most damage.

The Red, White and Blue tacked on another pair of runs in the fifth, cutting the margin to 6-4. Carlos Quentin (OF, Fr, Stanford) – who had doubled – scored on a Weeks base hit, and Jeremy Reed (IF, So, Long Beach St.) dashed home on a passed ball. The Americans then tied the game 6-6 in the top of seventh off reliever Chien Fu Yang on three singles and a hit batsman, but it wasn’t enough. Team USA wasn’t able to capitalize any further, leaving the bases loaded.

That’s when Taiwan rallied in the bottom of the frame for the game-winning run. Yang (1-0 ) was credited with the victory, while Bengochea (3-1) absorbed the defeat, his first in two years as a member of Team USA.

In the nightcap, Brownlie (7-0) went all seven innings to pick up his team-leading seventh win. He allowed just one run on seven hits, striking out seven in the process. He ends the summer with a Team USA best 0.84 ERA.

Team USA took a 2-0 lead in the first off Taipei’s Wei Lun Pan (0-2). A pair of singles and a walk loaded the bases, and the Americans scored on a fielder’s choice and a wild pitch. They went up 3-0 in the second when another unearned run crossed the plate, as Taiwan made four errors in the game.

Taiwan’s only run came on an RBI-single by Chien Ming Chang in the second. Reed, Baker and Quentin all had two hits in the game for Team USA. Reed ends the summer with a team-leading .366 batting average.

For a full recap of the 2001 USA Baseball National Team Red, White and Blue Tour with final team statistics, boxscores and photos from all 29 games, visit the USA Baseball Website at www.usabaseball.com.