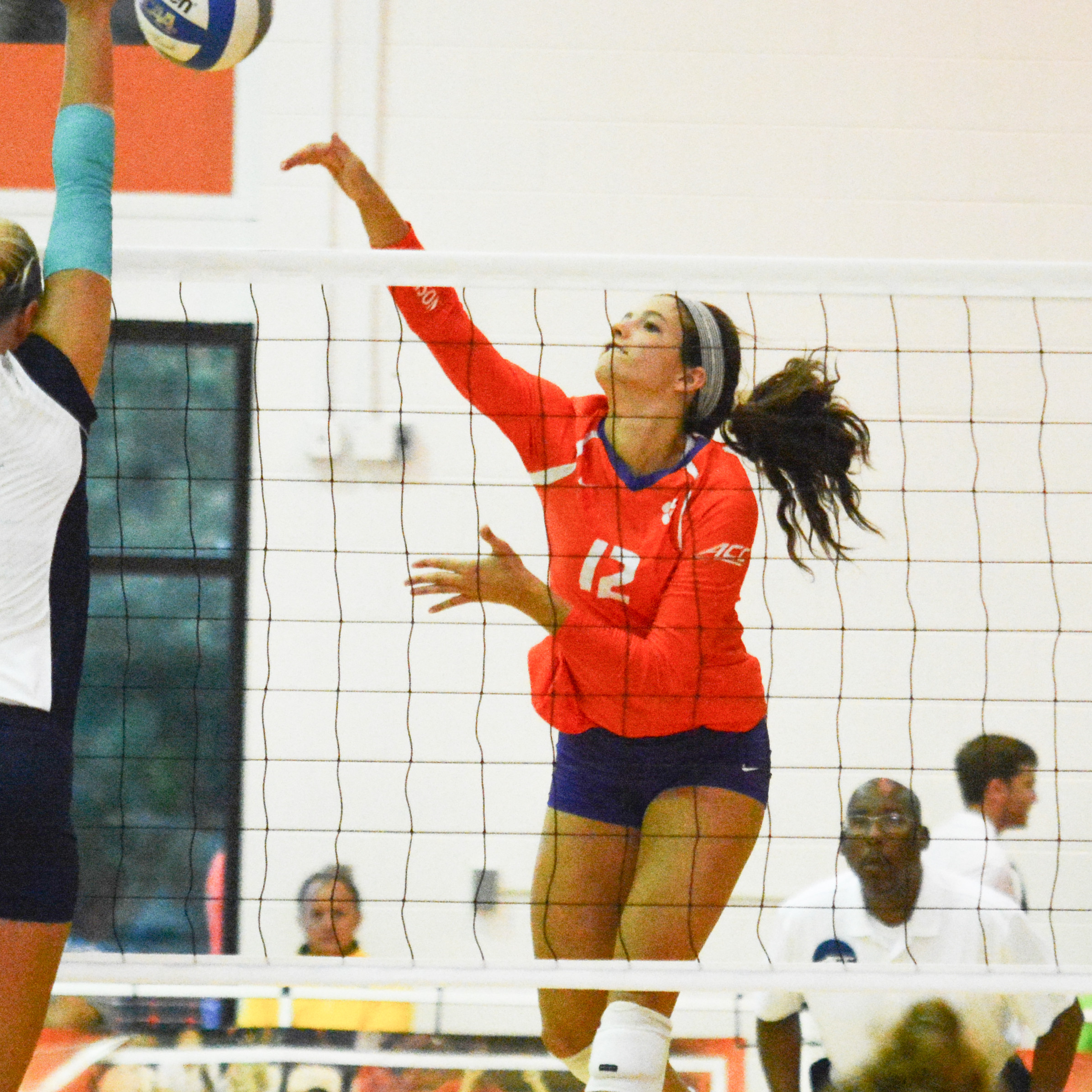 “We knew going into this weekend that it was going to be good preparation for ACC play,” said head coach Hugh Hernesman. “We had a tough third set and I thought TCU had a lot going for them. We just couldn’t generate a rhythm for ourselves and again, that’s a situation where we could have just rolled over and we didn’t. We came back; we made it a real tough fourth set.”

“We dealt with some adversity with Keelie (Arneson) getting hurt early in the set, I thought Kennedy (Wilson-Talmadge) came in and did a great job, we didn’t skip a beat. She did a really nice job and I think she sparked us a little bit so it was nice to see us not throw in the towel at that point, we still continued to compete.”

Arneson had 19 digs through three sets and the Tigers rallied around Wilson-Talmadge when Arneson left the match with a minor injury. The freshman was good for nine digs, just one shy of her first collegiate double-digit dig performance. Arneson is now 46 digs away from cracking the NCAA’s list of all-time career digs leaders.

“One of the things we talked about yesterday was that our emotions throughout the day were a bit up and down. We talked about trying to be more even keeled and staying off that emotional roller coaster and I thought we did a really good job of that. After that first set when we lost I was really proud of the way we competed and how level we were and that’s probably what keyed that second set for us to come back and do what we did. I thought it had a lot to do with our composure.”

A lot of the team’s confidence once again came from the success of its hitters as Leah Perri fired off 18 kills to lead the Clemson offense while tallying eight digs and three blocks. On the other side of the net, Kailey Harvell converted on 15 kills and hit .303 through the first three sets. Sydney Moseley once again was solid offensively and defensively, connecting for eight kills to go along with her 13 digs.

Kate Federico found hitters for a season-high 44 assists giving her eight matches with 30 assists or more. Her 11 digs made her one of the three Tigers to record double-figure digs and the performance marks her sixth double-double this season.

“I was really happy with our pin play, I thought our pin hitters did real well. Syd came in and had eight kills, was efficient, handled the ball well and I thought that was the key for us. When Syd passes like that which is most of the time, I think our offense is really efficient and I think she did a really good job of keeping the ball in play, creating kills and taking what the defense was giving her.”

“Kailey looked like she did last week. I think yesterday she really wanted to do well and that created some things within her approach that made her a little bit early, didn’t allow her to see the block as well and it didn’t allow her to utilize her best skill set and that is her leaping ability, her fast twitch, her ability to go get the ball and get on it before teams can get set. I think we saw that today from Kailey, we saw what we saw all last weekend and it’s in there for her. I thought she did really well and helped balance everything out.”

“Yesterday was a lot of Leah, but today Kailey pitched in, Syd pitched in, I thought our middles pitched in when we were in transition and when we can get performances like that all the way around it feels good and you’re going to continue to see us play good volleyball.”

Megan McGinley had one of her best matches offensively as she connected for a .444 hitting percentage on her four kills. Sofia Hruby matched her four kills and they both also tallied two blocks each.

Overall Coach Hernesman was very pleased to see his young squad not shy away from the big moments and he’s starting to see the student-athletes execute his defense-based system. Clemson’s last two matches are two of its top three matches this year in digs and they were two of their better matches offensively as well against teams very comparable to the competition the ACC presents.

“The system takes a while and people might not quite understand it from the outside, but we’ve seen this before,” Hernesman said. “We’ve seen this in our past. After 20 years of coaching and three rebuilds we know the progression, we know where it’s going. I think the more difficult part is for our players to remain patient during that process because sometimes it doesn’t feel great but it takes a match like this for us to lock in and they can see how good it can be.”

“I thought today they executed our defensive system really well, I think they saw how it paid off and we know that’s going to become more and more consistent as the season goes on.”

The Tigers will take on their first round of ACC competitors next weekend in Jervey Gym as Clemson will play host to Georgia Tech on Friday and Syracuse on Sunday.