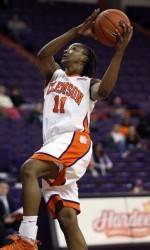 “We played hard for the full 40 minutes,” said head coach Cristy McKinney. “We got a big game out of [Shaniqua] Pauldo, and our bench stepped up. We learned from both the UNC and Wake Forest games and played better because of them.”

Tate scored 11 points in the game, a season-high for the junior form Birmingham, AL. She hit both of her attempts from the field, including a crucial bucket with 2:57 to play to give Clemson a 65-61 lead.

Facing a 61-57 deficit with 4:40 remaining, Clemson embarked on an 8-0 run, seizing a four-point edge on a jumper from Pauldo, two free throws each from Hardy and Tate, and Tate’s layup.

Hardy’s 18 points and 13 rebounds gave her seventh double-double of the season and 29th of her career, moving her ahead of BC’s Carolyn Swords, who was held to eight points and three rebounds, fouling out in only 17 minutes of play

Stefanie Murphy finished with 19 points and 14 rebounds for the Eagles, while Mickel Picco was held scoreless in the second half after scoring 17 in the first frame.

The Tigers trailed, 34-29 in the first half, after trailing by as many as 11 points in the period. However, Pauldo scored all eight points of an 8-0 run to pull the Tigers within three, including two consecutive threes from the top of the key. The sophomore center shot 8-12 in the game and 2-3 from behind the arc, and connected on all six of her free throws, giving her 24 makes in her last 26 attempts from the stripe.

For the Tigers, it was their first win against Boston College since the Eagles’ inclusion in the ACC, and three of the last four games have been decided by five points or fewer. Clemson also moves 5-0 on the season in games decided by less that three points, or in overtime.

Early in the second half on a pass to Hardy, senior Christy Brown moved into 10th all time in assists, racking up her 339th dish of her career.

Hardy hit several milestones of her own. With her 18 points, she jumped to 1,425 points in her career, moving into ninth in Clemson history, after stating the game in 11th. She also had 13 rebounds, giving her 874 in her career, tying Shandy Bryan for third on Clemson’s all-time list. She also had five steals, giving her 360 for her career. She is now ten shy of seventh in ACC history in career steals, and ranks fourth in career steals/game.

Tate’s seven for eight night from the free throw line set new career highs in makes and attempts. The Tigers as a team were 20 of 25 from the line, the third-best free throw shooting night of the season. The Tigers took their first lead of the game with 3:39 remaining in the second half on two made free throws by Hardy, the only time all game that the Tigers would seize the lead. They made the most of the opportunity, holding the edge for the remainder of the contest.

The Tigers played an outstanding second half, outscoring the Eagles, 39-31, and committing only two turnovers in the half. The Tigers were also able to stay out of foul trouble, only sending the Eagles to the line 15 times. Clemson was outrebounded, 39-36, in the game, moving them to 2-10 on the season when being outrebounded. They also improve to 10-1 on the season when scoring 65 or more points.

The Tigers have little rest, as they turn around for a game with NC State on Sunday at 2:00 pm in Littlejohn Coliseum prior to the men’s game. Fans with a ticket to the men’s game may attend the women’s game free of charge.