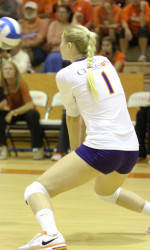 The Tigers return to action on Saturday at 4:00 pm against NC State, who is coming off a big, come-from-behind five-set win at Georgia Tech on Friday. The match is available on TigerCast at Clemsontigers.com.

The Tigers dropped a second straight match in five sets, falling back to even in ACC play at 2-2. North Carolina tagged Clemson for an opponent season-high 15.0 blocks in the match, consistently changing Clemson’s attack approach at the net.

Clemson also managed 15.0 blocks, giving them a combined 33.0 in the past two matches. Alexa Rand registered 8 blocks to lead the Tigers for the second straight match, and ended with 393 career total blocks, moving her into sole possession of tenth place in the list. Rand also had a strong night offensively, and was one of three Tigers who registered 14 kills. Rand did it in an efficient 25 swings, and finished with 18.0 total points.

Serenat Yaz registered a double-double with 14 kills and 13 digs, and also tied a career high with six total blocks. She hit .353 from the outside, and had four kills in the final set. Sandra Adeleye also registered 14 kills, but struggled at points in hitting around the Carolina blockers.

Freshman Kamryn Sherman led Clemson with a career-high 32 assists, and also had six digs and a pair of aces. Fellow freshman Kristin Faust had a match-high 15 digs, to go along with seven kills. Another freshman, Karis Watson also chipped in with four kills and four blocks.

Sophomore setter Hannah Brenner registered a second consecutive double-double, this time with 18 assists and 13 digs, as North Carolina found her on many attacks.

Clemson surrendered just one ace on the night, but allowed the Tar Heels too much offensively in the fifth set. The Heels scored 14 of 15 points on kills.

Clemson took a close first set, rattling off four in a row to stun the Tar Heels, who looked to be in control with a 23-21 lead. Clemson had come out to an early 14-8 lead, but an 8-1 Carolina run gave the Heels a three point advantage at 21-18. Clemson then rattled off seven of the last nine, clinching the set on back-to-back blocks from Yaz and Rand.

The second set was much like the first, with the teams getting to a tie score on 13 occasions. Neither led by more than two points at any point during the set, except for Clemson’s 20-17 advantage on a kill from Adeleye. North Carolina responded with three straight points until an attack by the Heels sailed out of bounds, forcing them to take a timeout down 21-20. The teams then traded points until, with the set tied at 24, the Tar Heels used a kill and a Tiger error to take set two 26-24.

In the third set, the Tigers were down 9-5 before the Tarheels went on an 11-2 run to blow the set open. The Tigers dropped set three 25-15, however, bounced back quickly in set four. Down 5-3 early in the set, Clemson rattled off four straight points to take a 7-5 lead. Clinging to a 14-11 lead, Clemson rattled off nine of the next ten points to take a commanding 23-12 set lead. They would go on to win the set, 25-14, sending the match to five.

For the second straight match, Clemson battled in the fifth. Clemson led 3-2 early before a 4-0 run gave the Heels a 6-3 edge. Clemson got it to within one at 9-8 on a kill from Simmons, but Carolina took four of the next five to take a 13-9 lead. With match point at 14-10, Clemson fought off three straight to pull within one at 14-13, but a McGee kill put an end to the match after a lengthy rally, 15-13.