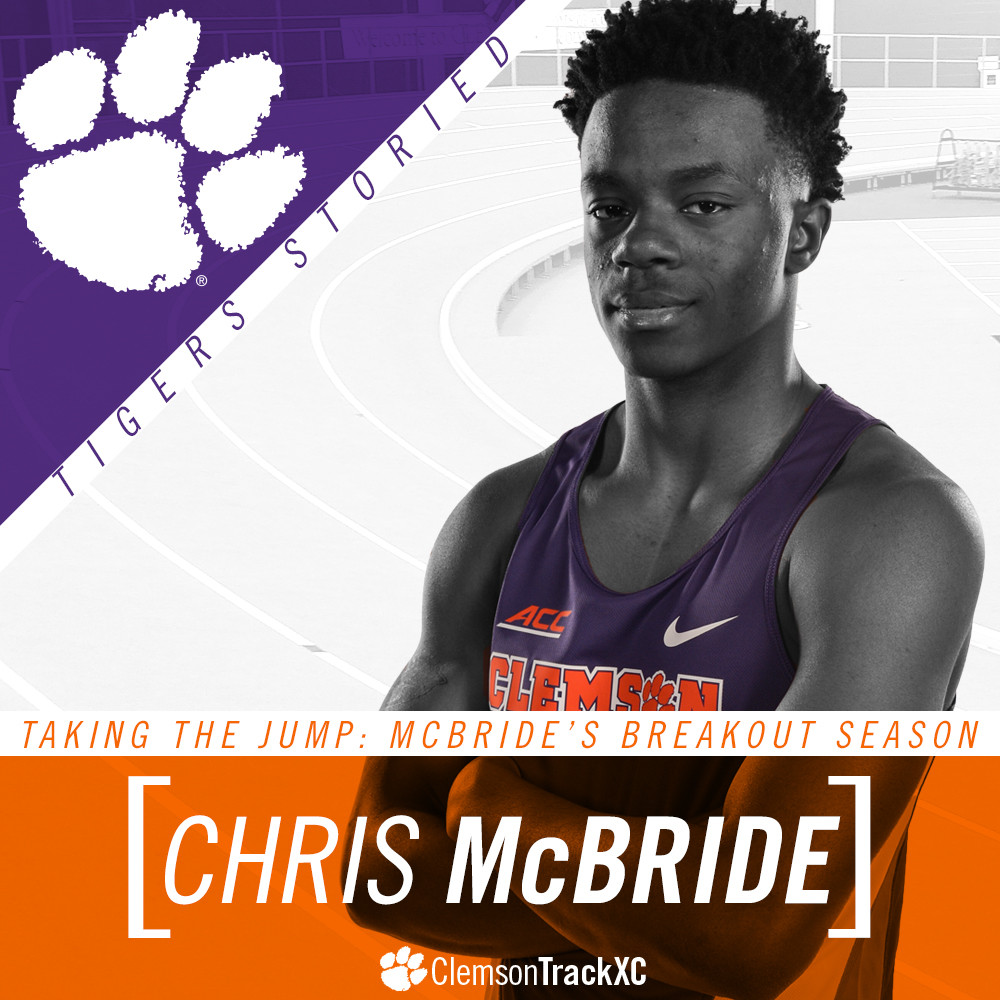 Taking the proverbial jump in life is never easy, but Clemson sophomore Chris McBride has done so with ease, leaping his way onto the big stage and into the record books. McBride has already established himself as the heart and soul of the Tigers’ jumps unit and is well on his way to becoming the next superstar in the illustrious history of Clemson track & field.

Hailing from Lithonia, Ga., McBride was a high school phenom in both the long jump and the triple jump, winning the state title in the long jump twice and placing second in the state triple jump competition while competing for Redan High School. The list of accolades is lengthy for the jumping prodigy and includes such grandiose achievements as winning an AAU Club National Championship in 2014.

Any sense of arrogance that could be reasonably expected to surface in the personality of a 19-year-old athlete sporting that level of athleticism is simply not present in McBride’s calm, soft-spoken demeanor. Mature beyond his years, McBride boasts the humble, team-first attitude that is perfectly befitting of the culture instilled by head coach Mark Elliott and his staff at Clemson.

“In high school, when I was being recruited and came on my visit here, it just felt different,” McBride said. “It felt like the Clemson family was real.”

McBride has a history of building a strong rapport with his coaches, embracing their tutelage to better himself on and off the track. His tenure thus far has sustained that pattern, as McBride has meshed well with Clemson jumps coach Chris Bostwick, showcasing all that he has gleaned from him through his impressive performances.

Affectionately referring to Bostwick as “Coach B,” McBride holds a special connection with the Clemson assistant that was one of the deciding factors in his recruitment to compete for the Tigers. “When I met Coach B, I knew that he was the coach for me.”

However, without McBride’s AAU coach, Bostwick and the rest of the track & field world may have never discovered the incredible talent now serving as the backbone of the Clemson jumps squad.

“My AAU coach, Coach Gray, pulled me aside when I was 11 or 12, and he told me that I was going to do the long jump,” McBride recalled. “He encouraged me to stick to it and trust him. So, really, all the thanks goes to Coach Gray as far as getting me started in long jump.”

The rest, as they say, is history, with McBride proceeding to become one the nation’s best and brightest amateur long jumpers. Recently setting and resetting the Clemson record in the long jump, McBride has been outstanding during the indoor season heading into the ACC Championships in South Bend, Ind.

With a jump of 25-5.25 at the Rod McCravy Memorial, McBride broke a top mark that had been entrenched in the Clemson record book for over a decade. Success is certainly never final for McBride, though, which is an outlook that was epitomized by the breaking of his own record merely weeks after garnering his original record-worthy distance. He leaped to glory during the Tiger Paw Invitational at Clemson’s home track, accruing a distance of 25-6.75 that currently stands as the longest mark of the season in the ACC and the 12th longest in the nation.

McBride’s record-setting showings signify years of dedication to the sport, particularly the craft of long jumping. The milestones also signify to McBride just how high his ceiling is, with his lifelong dream of becoming an Olympian becoming closer to reality with each passing performance.

Furthermore, the symbolic breaking of a Clemson record previously held by George Kitchens, a 2012 Olympian, is added motivation.

“One of my dreams, as far as track is concerned, is to go to the Olympics,” he admitted. “To break an Olympian’s record, it gives me that extra confidence to know that I can someday achieve my goal.”

If his rapid ascension in the college ranks is any indication, McBride could very well grace an Olympic roster one day and should be expected to do everything in his power to earn that opportunity over the course of his remaining Clemson career. McBride will be considered a freshman for the outdoor season, because of a redshirt taken last year due to injury.

Although the Olympic goal is a figurative prevailing wind beneath McBride’s wings, his poise and determination keep him mindful of the next leg of his journey, never allowing him to get too far ahead of himself and always keeping him focused on the priorities at hand. Right now, the priority is finishing the indoor season strongly, and, true to form, McBride has goals that he is aiming to fulfill prior to the season’s end.

From winning the ACC title in the long jump to being named as an All-American, as well as reaching the elusive 26-foot mark, McBride is confident that he can continue to steadily progress as a competitor and achieve those goals. With that said, he is a team player in every sense of the phrase, and his primary goal for the remainder of the indoor season is to help his team in any way that he can.

With a team ACC title posing as the ultimate prize in McBride’s mind, the honor would represent a lifelong commitment to the sport that has come to define part of what makes him who he is.

“Without jumping, I really don’t know where I’d be. I started participating in track & field when I was six, so it’s a big part of my life.”

Through and through, Chris McBride is a posterchild for Clemson Athletics. A model citizen, student and athlete, he is living proof of the benefits that can be reaped by way of a life dedicated to continuous improvement via the utmost focus and determination. McBride took the jump from a highly successful prep career to a new beginning at the collegiate level, and he stuck it, literally and figuratively. For McBride, going the distance is more than just a metaphor; it is the driving force of his life, on the track or elsewhere. A leap of faith is all that is required when setting out to maximize one’s potential, and it is something that McBride is never hesitant to do. He takes the jump each and every time and will not quit until his journey is complete.