CLEMSON, S.C. – Clemson redshirt junior Kaylin Korte poured in a career-high 21 kills, which is good for the most by a Tiger in a single match this season, but Syracuse (4-5, 1-1 ACC) registered the final two points of the fifth set to secure its first ACC win of the season in Jervey Gym Sunday afternoon. The Orange were led by reigning ACC Freshman of the Year Polina Shemanova who accrued a match-high 24 kills on 62 swings and Ella Saada who registered 21 kills.

Results might not of been what we wanted this weekend but there is something in this team and we will find it. I’m excited for the journey! https://t.co/Ylvjit3ggG

After dropping the first set 25-20, the Tigers came out swinging to open the second. Korte tallied five of her 21 kills in game No. 2 and helped her team lock down an early 11-5 lead. Despite the Orange cutting CU lead to two on three occasions, the Tigers fended off Syracuse by winning five of the last seven points of the set to even the match heading into the break.

Ava Pritchard sends the ball TO THE FLOOR 💥

Coming out of the locker room, the two teams were never separated by more than two points throughout the entire third game. Once again, Korte tallied five kills, while middle blocker Ava Pritchard posted four kills of her eight kills in the third. The Orange held a 23-21 lead late in the set, but Clemson came back to take game No. 3 in extras, 26-24, after claiming the last three points of the set including the final play, a long rally that was highlighted by a diving dig from defensive specialist Madi Howell which led to a Korte tip that confused the Syracuse defense.

THE THIRD IS OURS AND SO IS THE LEAD 🤝

We closed out set No. 3 by claiming five of the last six points to come back 💯

Despite its 2-1 lead, Clemson could not sustain momentum as Shemanova pummeled seven kills to lead the Orange to a 25-17 victory in the fourth, which also tied the match 2-2. In the fifth, Syracuse secured an 8-5 lead before both teams swapped benches one last time. The Tigers, once again, forced extras after Syracuse took a 15-14 lead, but back-to-back points for the Orange sealed the set, 17-15, and match in Syracuse’s favor.

In addition to her 21 kills, Korte tallied her 10th career double-double and sixth of the season after digging 12 Orange attacks. 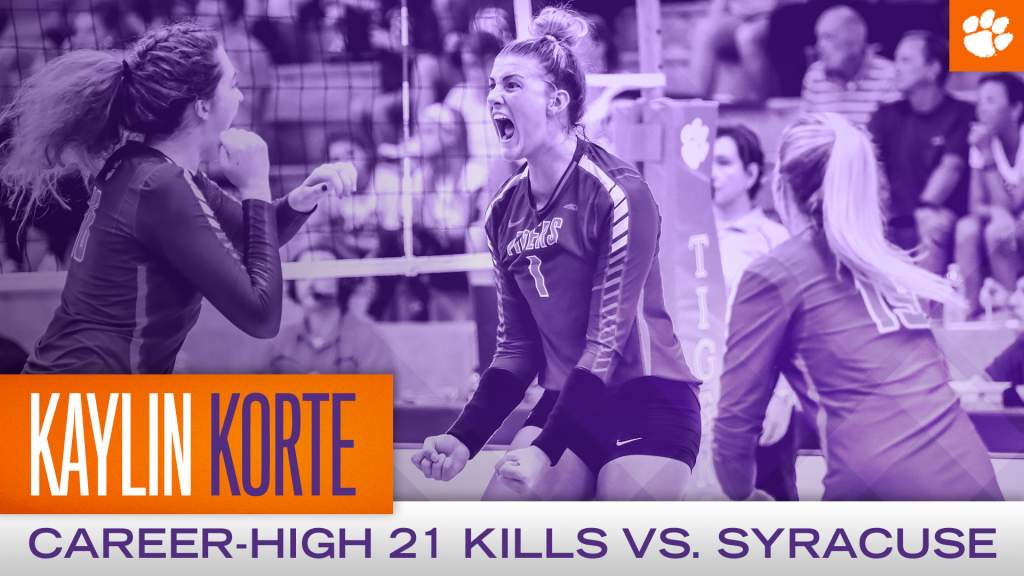