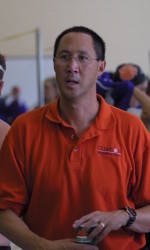 Christopher Ip’s men’s and women’s swimming programs both had over a 3.0 GPA for the first semester of the 2004-05 academic year to highlight the academic report for Clemson athletic teams. The team GPAs and academic honor roll students for the first semester were compiled by the Clemson University Office of Institutional Research and Planning.

Other programs with at least a 3.0 weighted GPA were women’s soccer (3.27), women’s tennis (3.07), volleyball (3.00) and rowing (3.00). It marked the ninth consecutive semester that Todd Bramble’s women’s soccer team had at least a 3.0 and the 12th semester in the last 13. That team also had 19 student-athletes named to the academic honor roll, second highest on record.

The Clemson baseball team established a semester record for team GPA (2.95) and student-athletes on the academic honor roll with 21.

It should be noted that this year’s team grade point ratios are a weighted average (sum of hours attempted/semester grade points earned). In previous years dating to the 1980s, the team GPR report was generated by the unweighted method that took the sum of the student-athletes grade point averages, divided by the number of student-athletes in that sport.