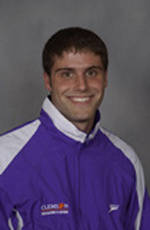 Chapel Hill, NC – The Clemson Men’s Swimming & Diving Team stayed in fifth place at the ACC Championships Friday night in Koury Natatorium in Chapel Hill, NC. Joel Johnson and Adam Farnham each collected two medals on the night as Johnson placed third in the 100 backstroke and Farnham took third in the 100 butterfly. The duo then teamed with Attila Ruszka and Brian Regone to take the silver medal in the 400 medley relay.

The night started off as freshman Matt Angelini and junior Andy Bergren swam in the consolation finals of the 400 IM. Angelini won the heat to place ninth overall with a time of 3:55.45. The time was good enough for fourth on the Clemson all-time list. Bergren finished 14th with a time of 3:58.45.

Ruszka took care of business in the 100 breaststroke as he was the only Tiger to earn a second swim in the event. Ruszka won the consolation final to place ninth with a season best time of 55.69. Johnson then stepped up to finish third in the 100 backstroke with a time of 48.71. He was just one one-hundredth of a second behind second place. The time was good enough to set the three-year old school mark that was posted by Mark Henly at the 2004 ACC Championships. David Giambra claimed another three points for Clemson as he placed 14th on the three-meter board. Giambra tallied 274.59 points, fourth among all freshman divers at the meet.

Clemson’s relay of Johnson, Ruszka, Farnham, and Regone closed out the night on a high note for the Tigers as they picked up points on everyone except leader Florida State.

The Tigers finished the relay in a time of 3:16.68, the second best 400 medley in school history, and an NCAA Provisional Qualifying mark.

Clemson will finish their run at the ACC Championships tomorrow as they will participate in the preliminary heats of the 200 backstroke, 100 freestyle, 200 breaststroke, and 200 butterfly. There will be timed final heats of the 1650 freestyle between the morning and night sessions. The Saturday morning session will begin at 11 a.m.