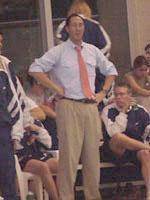 Clemson Swimming & Diving head coach Christopher Ip has announced the additions of Steve Phillips and Pam Swander to the Tigers’ coaching staff. Phillips comes to Clemson after a lengthy stint at West Virginia, where he served as the Mountaineers’ interim head coach for both the men and women teams in 2003-04, and will work with the sprint group. Swander has extensive experience coaching at the club and high school level of swimming and will work with the middle distance stroke group.

“We are extremely proud to have attracted these two outstanding educators to our program,” said Ip. “Pam and Steve have multiple coaching styles, elite coaching experience, and the passion to complement our programs’ mission and goals. They both have great people skills and we are already having a blast in the office and on the pool deck. “

Under Phillips’ leadership, 94 percent of his student-athletes had at least one personal best time in 2003-04. The women’s team also accumulated a 3.20 GPA in the Fall of 2003 while the men posted a 2.82 GPA in the same period. He guided the men to a 6-5 dual meet record while the women finished 3-9.

The role of interim head coach was the last of many Phillips took on for the Mountaineers. He was an assistant on the WVU staff from 2000-2003 where he assisted in recruiting, helped organize team travel plans and coordinated the program’s dry-land conditioning. Phillips coached two 2000 Olympians and helped the Mountaineers break 32 school records during his assistant stint.

From 1995-1999 Phillips was a four-year swimming letterman for the Mountaineers. During that time he was a two-year team captain and a Big-East finalist and Academic All-Star Team four times. In 2000, Phillips earned his bachelor’s degree in exercise physiology and in 2001 he collected his master’s in athletic coaching and education. Both degrees were obtained at WVU.

“I’ve heard great things from friends and colleagues about Clemson and the pride everyone has here,” said Phillips. “I am very excited to be at Clemson and coming from a small community at West Virginia, I feel like this is a perfect fit for me.”

“Steve Phillips has developed a strong coaching philosophy with his backgrounds in exercise physiology and coaching administration,” said Ip. “He knows what it takes to recruit and coach high-energy collegiate athletes.”

Swander was senior coach and Swim-America Director at Washington Township Swimming Club from 2001-2004. Swander coached 60 senior and 45 age group swimmers at the top club in the state of Indiana while supervising 20 swim lesson employees and 800 lessons monthly.

From 2000-2001 Swander served as assistant senior and age group coach at the Indiana University Natatorium in Indianapolis where she coached gold elite and senior developmental groups and implemented a program-wide curriculum.

Prior to a three-year stint as head age group coach at Center Grove Aquatics Club in Greenwood, IN, Swander headed the Yorktown Swim Club and High School programs from 1987-1997. Swander graduated from Arizona State University in 1986 with a bachelor’s degree in secondary education.

Pam and her husband Jeff have two All-American children. Laura is a senior at Auburn who swam the breaststroke leg of the NCAA Champion 200 medley relay which set the NCAA, US Open and American record (1:36.69) in 2002-03 and repeated as NCAA Champions in 2003-04. Kevin is a junior at Indiana who took first place in the 100-meter breaststroke at the 2004 ConocoPhillips Summer National Championships. Kevin also earned Big Ten Swimmer of the Championship honors and placed seventh in the 100-meter breaststroke at the Olympic Trials this year.

“I fell in love with the Clemson community during my interview,” said Swander. “I was attracted to Coach Ip’s success overall and with the program the last two years.”

“I believe that Pam Swander is one of the top women club coaches in the country,” said Ip. “She brings 25 years of club and high school coaching to the Clemson program. Her knowledge and expertise in stroke mechanics will add the personal touch for our athletes to improve throughout their collegiate careers.”