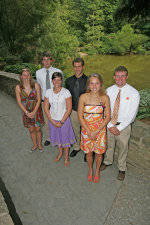 Swimming and Diving to Take On UNC, Rutgers Saturday

The meet will feature some of the conference’s best swimmers in several events. One matchup to watch will be Clemson’s Rachel Regone and UNC’s Kelsey Morrissy. Regone has the fastest time in the ACC and school record in the 50 free, while Morrissy is third best. Regone’s 22.68 came at the Nike Cup in the same pool. In the 100 free, Morrissy edged Regone at the Nike Cup.

UNC’s Whitney Sprague has been a standout so far this season, swimming the fastest time in the ACC in four separate events. Another great matchup will be with the Tigers’ Michelle Parkhurst in the back events. Parkhurst won the 100 and 200 back at the Nike Cup over a pair of UNC swimmers.

On the men’s side, the Tigers appear to have an advantage in the sprint events, led by seniors Mark Vahle, Matt Balderston, Stephen Russell and Adam Farnham. The Tigers also have a strong IM and breast lineup, led by Attila Ruszka and Matt Angelini.

The Tigers also have two prominent transfers from Rutgers. Eric Lane left Rutgers after the school dropped the program following last season, and has made his way into Clemson’s all-time top 10 in the breast. Alex Allen is a vital part of the Tigers sprint lineup and free relay groups.

After the meet in Chapel Hill, the Tigers will continue the 2008 portion of their schedule on Jan. 17 at Davidson for a dual meet.