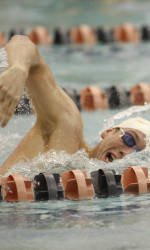 Swimming and Diving to Open Dual Season Against Davidson

CLEMSON, SC — The Clemson men’s and women’s swimming and diving teams will begin the 2010 regular season against the Davidson Wildcats on Friday night at 7:00 PM at McHugh Natatorium.

This will be the season opener for the Tigers and the Wildcats. Both Tiger squads boast all-time winning records against Davidson, with the women unbeaten at 8-0 and the men holding a 15-14 advantage.

Head Coach David Gordon, a long-distance specialist. On the women’s side, sophomore Tori Cervone will lead the Tigers, along with fellow sophomores Meg Anderson and Kristen Redmond.

Head Coach John Young is in his fifth season at Davidson. The Wildcats finished at the top of the 2009-10 Coastal Collegiate Swimming Association standings. The men won the league title, while the women finished in second place.

Admission to Friday night’s meet is free to the general public.