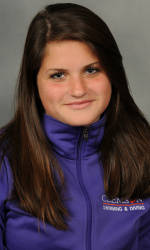 Swimming and Diving Falls to Gamecocks

COLUMBIA, SC – The Clemson swimming and diving teams fell to the South Carolina Gamecocks in a dual meet on the road on Friday night. The men’s team lost by a score of 169.5-125.5 and the women’s team dropped its matchup with South Carolina by a final of 167-133.

The Clemson women’s team was paced by Ali Polhill, who won a pair of events in the meet. She brought home the title in the 100 backstroke with a time of 57.78 seconds. She also won the 100 butterfly, finishing in 57.11 seconds. Meg Anderson also had strong performances in sprints, anchoring the victorious 200 medley relay team and finishing with the fastest time in the 100 freestyle at 51.82 seconds.

Clemson put together some strong performances in the relays, sweeping the 200 medley relay and the 400 freestyle relay on both the men’s and women’s sides. Kristen Redmond and Tori Cervone also won events for the Tigers.

The Tigers will be back in action next Friday, November 5, as they play host to Georgia Tech in their ACC opener at McHugh Natatorium. The meet will begin at 6 p.m.