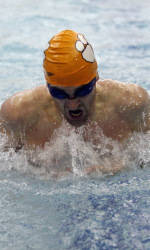 Swimming and Diving Faces Off Against Archrival South Carolina in Columbia

COLUMBIA, SC — The Clemson men’s and women’s swimming and diving teams will travel to Columbia, SC to face the South Carolina Gamecocks in a dual meet on Friday, October 29 at Carolina Natatorium. The diving portion of the meet will begin at 4 p.m., with the swimming portion to follow.

This will be the 70th meeting in the pool between the two schools in men’s swimming and the 36th meeting on the women’s side in a series that dates back to 1923. The Gamecocks enter Friday’s meet undefeated, as both the men’s and women’s squads defeated Western Kentucky two weeks ago. The women’s team also beat Vanderbilt to open its conference season.

The Tigers will look to build on a strong opening performance in a season-opening home victory against Davidson on October 1. Sophomore David Gordon finished on top in two events for the men’s team.

Live stats for Friday’s meet will be available at SportsTiming.com.